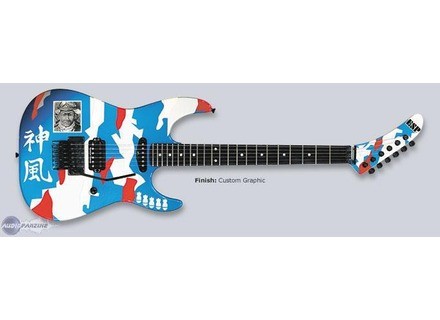 ESP Kamikaze-2
4
Afficher la traduction automatique
Afficher l'avis original
This is the second in the line up, and there's really nothing different about this guitar other than the red, white and blue camo paint job on this. I actually like this paint job the most because it's the most unique. It seems to stand out a bit more than the others for whatever reason. The guitar features a maple body with a bolt-on maple neck, an ebony fretboard with 22 extra jumbo frets, dot inlays, an original floyd rose bridge, an ESP single coil in the neck, a Seymour Duncan Screamin Demon in the bridge and a push/pull volume pot to select between the two pickups.

The guitar is pure quality, just like most ESPs. The neck joints on the standards are usually fairly good, and this one is no exception. I could probably shove a small feeler gauge down in there, but it's nothing that's really going to affect anything in terms of stability and tone. The fretwork on this was top notch, so no issues there. I love the huge jumbo frets that ESP uses as well. The ebony on this was like playing on glass. It was so slick and shiny. The guitar had some weight to it thanks to it being almost all maple, so be prepared to deal with that.

The guitar itself is very bright. If you can't deal with bright guitars, you might want to look elsewhere. There aren't many pickups out there that can help cure this brightness, and the Screamin Demon in this isn't one of them. For those who have never played a Screamin Demon, the pickup is like an underwound 59. It's the exact opposite of its name. It's a very clean pickup, but it kinda lacks the balls and girth that the other pickups have in the Duncan line up. The neck pickup in this is an ESP, and it's pretty good at what it does, but there are other pickups I'd probably prefer in the neck position.