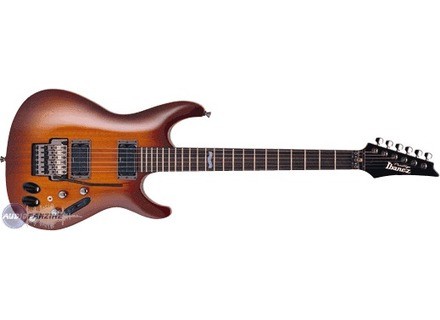 Ibanez S2120X
5
Afficher la traduction automatique
Afficher l'avis original
For those looking for what is most likely the ultimate Ibanez S series, this is most likely it. The biggest innovation that this guitar features is the piezo saddles that help emulate that acoustic sound. It makes it crazy versatile compared to other guitars on the market. The guitar features a mahogany body, maple neck with rosewood fretboard, 22 frets, a unique center inlay, the piezo Lo Pro Edge tremolo, two humbuckers, one volume, one tone, one piezo volume, one piezo tone, and toggle switches to select between various settings.

Ibanez did one hell of a job with this guitar as it features nearly everything you could think of. About the only thing they're missing would be a center pickup, and that's completely optional for me. I think this guitar actually has the Ultra neck, as it felt a touch thicker than what I'm used to. It could have just been my imagination, though. The fretwork on this model was top notch, the electronics were decent and the piezo equipped Lo Pro was probably about the coolest thing Ibanez could have added to this thing.

Despite this guitar being on the thinner side, it sounds very huge and resonant. I believe that its partly due to its mahogany body as opposed to basswood on the RGs. The pickups on this guitar suck, so I recommend replacing them right away. I'm a big fan of the Air Norton and the Evo 2 in these guitars as they seem to complement them the best for my playing style. Easily the best feature is the piezo. It's thick sounding and sounds fairly realistic when compared to an electrified acoustic guitar.