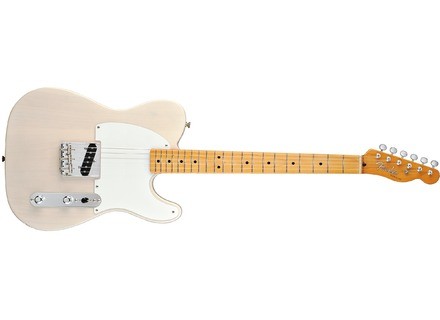 Fender Classic '50s Esquire
5
Afficher la traduction automatique
Afficher l'avis original
The Fender Classic Series '50 Esquire is a reissue of the first guitar made and distributed by Fender.  It has one single coil pick up along with a tone and volume knob.  It has the look and feel of a Telecaster and the original model of this one is what evolved into the Tele.

The make up of the Fender Classic Series '50 Esquire is incredibly simple.  Even if you don't have any experience with electric guitars at all, this is the most basic configuration that you can have and is easy to figure out what everything does.  The neck of the guitar is extremely fluid and is probably the best part about this guitar as the action is incredible, making the guitar easy to play overall.  As I mentioned before, the body and shape of the guitar is just like a Telecaster and is an easily recognizable design.  Getting a nice sound is as easy as plugging it in and cranking it up!

The sounds that are possible with the Fender Classic Series '50 Esquire aren't exactly versatile because it only has a single pick up, but the sound that you do get is pretty awesome.  I have used the guitar with a '65 Fender Deluxe Reverb amp for recording and was able to achieve some incredible results.  I mostly used the guitar without any effects, but did use an Ibanez Tube Screamer occasionally for some overdrive.  Either way, the tone that you get with this guitar is full sounding and full of life.

I've only used the Fender Classic Series '50 Esquire a handful of times for recording and really enjoyed playing it because of its great feel and outstanding tone.  I haven't been able to try out an original Esquire guitar as they are quite hard to come across and cost a lot of money if you can find one.  Hopefully someday I will be able to compare this reissue to the original, but what I can say now is that this is a great guitar.  You're pretty much getting a Telecaster with less features but more feel.  While I can't say that I recommend this as an overall go to guitar because it lacks versatility with only one pick up, if you are looking for an awesome overall guitar to supplement your others, definitely look into the Fender Classic Series '50 Esquire.
La Fender Classic Series '50 Esquire est une réédition de la première guitare fabriquée et distribuée par Fender. Elle a un micro simple bobinage avec un potard de tonalité et&nbsp;un de volume.&nbsp;Elle a le&nbsp;look et le feeling d'une Telecaster et le modèle original de celle-ci est ce qui a évolué vers la Tele.