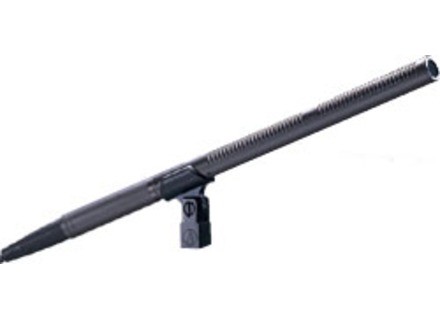 One of my main gigs is I play lead guitar in a fairly large touring pop rock band. Our sound guy and I have backgrounds in film and one day on tour he suggested we do a road documentary. I initially laughed it off and said he was crazy. But a few months and crazy chances later we actually decided to go through with it. We had a very good camera but we needed an ambient shotgun style mic. So the search began.

We really knew nothing about these kinds of mics, but we had a friend who had access to quite a few. The primary goal was reliability since we were going to drag it on the road and we really didn't want to bring a backup. After looking at a few brands, the Audio Technica shotgun mics seemed to feel the most solid. We also didn't want to spend more than half a grand which eliminated a lot of choices. But we were immediately attracted to this one and bought it. The fact that it operates off a battery and doesn't need phantom power is a great perk because we're obviously on the go. But the real question is: how does it sound? Well it sounds great I must say. We got some seriously nice audio out of it. And it doesn't really pick up a lot of room noise. Which is shocking based on how 3D the pickup pattern is. I don't know how they do it but it works great. We would definitely buy another one if this one broke but it never did.