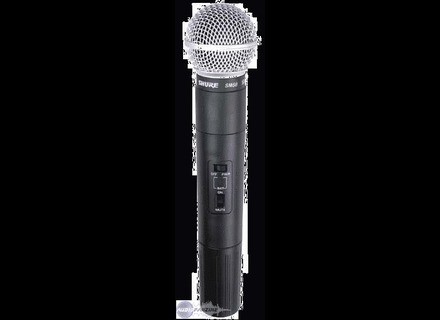 Shure EC/SM58
4
Afficher la traduction automatique
Afficher l'avis original
The Shure SM58 UHF is a wireless microphone system.
It is basically the wireless version of the SM58 by Shure.
That microphone is a classic microphone from Shure so they decided to
bring it to the wireless world. One of my favorite features
of the UHF SM58 is that you can do all of the microphone tweaking
to your tone right from the microphone without the need for anything
else. Depending on how your voice is with the tone and depth,
you will need to do some adjustments which can easily be done
right from the microphone. It has a boost, and also a -10dB pad, along
with a mute option (which is used when the microphone isn't being
used at the time. If you already have a PA system set up, then the SM58
UHF is compatible with it, this is one of the main features of the microphone.
It can be compatible with any PA set up. I have only used it with
Two different set ups and have not tested it with any others. But
it worked great and never gave any issues.

A lot of wireless systems can be difficult to set up and get rolling.
But with the SAM58 UHF you won't have any problems at all. It has
a feature that will allow it to find the best frequency to broadcast
on so you will not have any interference with outside sources transmitting
signals at the same time as you are. Having an channel that is free
from other signals is a must have when you are using any wireless system.

The sound quality of the SM58 UHF is very good, if you have used the
regular SM58 before then you already know how good it sounds. The price of
this microphone is a very competitive price. I recommend this to anyone
needing a wireless microphone system.