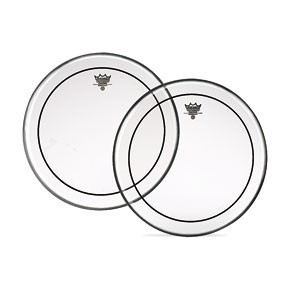 (contenu en anglais)
Afficher la traduction automatique
Afficher l'avis original
The old Pinstripe. Gotta love it. I have played Remo Pinstripes on and off since I started drumming 5 years ago. They are very well known in the entry level drumming scene, but don’t let that deceive you. These heads are great for all types of music, like rock, pop, fusion or even country. But like all piece of drumming equipment, it has its pros and its cons.

We’ll start with the pros of the Remo Pinstripe head. First off, like I said earlier, this is a very versatile drum head. It can be thrown on as a primary head, or even a replacement head, in just about any musical situation. This head produces a very “fat” “warm” or even “wet” tone. If you tune your resonant head well you can get a lot of ring and resonance out of the pinstripe even though it’s sometimes looked down upon for being a “dead” sounding drum head. There are rings that run along the edges of the drum head, in between the two plys, that dampen unwanted undertones that can ring throughout your playing.

Now it’s time to talk about the cons of the drum head. Like I said earlier, there are rings that run along the edges of the drum head, in between the two plys, that dampen unwanted undertones. Now some see this as a bad thing. This can sometimes dampen the drum too much, thus giving it the “Dead Head” reputation. What they mean by a “dead head” is that it’s hard to get good tone out of the drum without cranking it to the point of good resonation.

(contenu en anglais)
Afficher la traduction automatique
Afficher l'avis original
I have used the Remo Pinstripes before I started using Evans. These heads look good and sound moderately good. They are inexpensive in a pack deal and are very widely used. I used the Ebony Pinstripes before these, and these are loads better, as the Ebony Pinstripe are the worst heads I’ve ever used. I used these heads unruffled for a while, then out of a whim used the Remo muff rings. I had issues with the sound after, so I took them off. I was using a Pearl Export set at the time, which s not a horrible set, although not the best. The sad part is that these heads aren’t the cheapest heads; they are expensive.

The toms would also come undone at random intervals, making playing with tuned heads nearly impossible. I later bought a whole set of Evans EC2’s, and there was a huge difference. The drums stayed in tune longer and sounded clearer than with the Remo heads. The Remo heads are widely used, but they also are debatable on their quality. I have known many drummers who wont use Remo heads, I know drummers who only use them on their snares, and I know those who swear by them, it is all a matter of opinion.