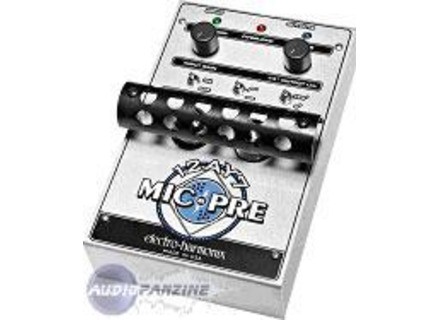 Electro-Harmonix 12AY7 Mic Pre
4
Afficher la traduction automatique
Afficher l'avis original
This is an analog mic preamp. It's got an XLR input and output, as well as an additional 1/4" output. It's not rackable, and not connectable to a MIDI controller, as it's all analog. It's basically a tube mic pre, so there aren't really any effects.

There isn't a whole lot of editing to be done here, as you're looking for a good tone for voice, mostly. The setup and configuration isn't difficult. the manual explains everything pretty clearly. The main controls are for input level (mic level) and output level, same as any other pre. There's also a phantom power switch, a phase reverse switch, and a low-pass filter to help with feedback or noise issues.

This is overall, a pretty good sounding mic pre. It's actually better for quiet music, as I've found through my experience. Great vocalists who really belt out their parts don't sound as great through this as hushed, almost whispery music does. Seeing as the latter style of singing is getting more and more popular among certain crowds makes this a good purchase for people who see themselves recording that type of music in the future. It's overall pretty transparent, yet it has a great ability to highlight the natural tones of the voice without getting all the harsh sibilants that come with a whispery performance. It's also pretty good for some of the louder singers, though I use it less frequently with them. It really depends on what you're looking for.

I'd have to say overall that the mic pre isn't quite as versatile as I'd hoped, but it's very good in particular situations like the ones I mentioned. Don't expect it to color the sound too much, or too little, it's a healthy middle ground. $200 isn't too bad a price for one of these, but certainly don't make it your first one, definitely get something with a little more versatility. Overall, a nice addition to a recording setup, but don't use it as the backbone.
Ceci est un préampli micro analogique. Il possède une entrée et une sortie XLR, ainsi qu'une sortie jack 1 / 4 ". Ce n'est pas rackable, et non connectable à un contrôleur MIDI, comme c'est tout analogique. Il s'agit essentiellement d'un préampli micro tube, donc il n'ya pas vraiment de effets.

Even if you don't have much experience with mic pres, the Electro-Harmonix 12AY7 Mic Preamp isn't anything that you have to worry about in terms of utilization.  The pre has knobs for input gain and 1/4" output level, along with switches for bypass, high pass filter, and polarity.  I've never had a need to check out the manual for this mic pre, as I found it easy enough to use on its own without the assistance of one.

The overall tone of the Electro-Harmonix 12AY7 Mic Preamp is pretty awesome, as it definitely gives you that thick tube sound.  While it isn't the cleanest tube mic pre I've heard, as far as single channel tube based mic pres in this price range go, it doesn't get all that much better than this.  The pre can be used to record just about anything, although I've only used it with electric guitar.  This is the perfect little pre to add to your home studio collection for times when you want a warmer and/or different tone than what might be offered on your audio interface or solid state mic pres.

While I can't say that the Electro-Harmonix 12AY7 Mic Preamp is the best sounding tube mic pre out there, it is one of the best sounding in this price range.  There are a lot of options now for tube based mic pres in this price range, but a lot of them don't sound all that good, and this is definitely one of the better ones that I have used and/or heard.  It'll only cost you around $200 USD, which is not bad at all considering the great sound and tube versatility being offered up here by EH.  While it is a bit strange how it is cased up, this isn't a bother to me and is overall a desirable tube mic pre for home studio owners.