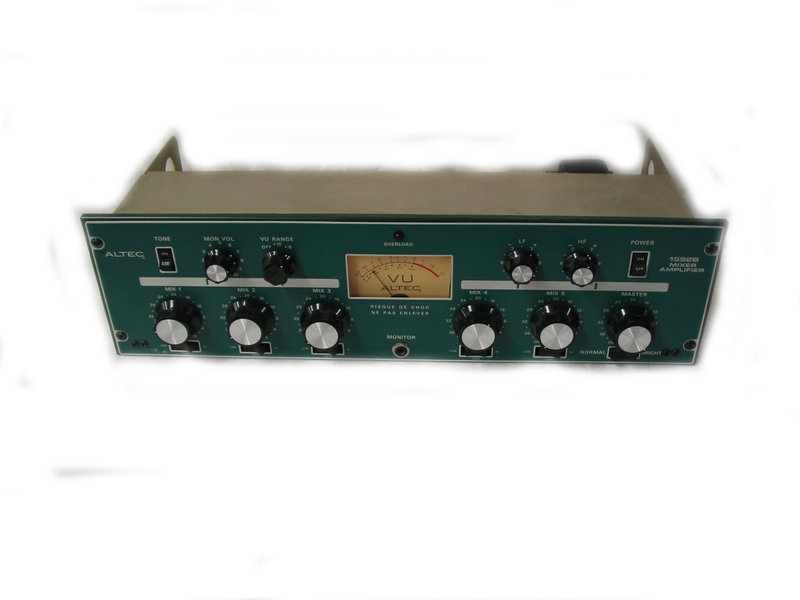 (contenu en anglais)
Afficher la traduction automatique
Afficher l'avis original
The Altec Lansing 1592 B is an analog mixing amplifier and microphone preamplifier. It is uniquely designed, as it has five channels, each with their own parameters. I'm unsure of the connections that it has, as the one I've used was already racked up and routed through the patch bay, so there was no need to do any connecting in the back of it. However, I do believe that it has XLR for each of the channels. It is indeed in rack mountable form and will take up four spaces.

The configuration of the Altec Lansing 1592 B isn't too hard to understand, although it is a unique piece of equipment. Each of the five channels have leveling knobs, as well as gain switches that act as a pad. There is then a master volume knob that will control the level of all five of the channels. In addition to these basic parameters there is also a tone switch, a monitor volume control, and high and low pass filters. There is also a VU range knob that allows you to control your metering. The manual for the 1592 B is thorough and helpful.

You can use the Altec Lansing 1592 B in a few different ways. You can use as you would a mixer, or just use the preamplifiers in it on their own - the latter of which is what I've used it for. With the 1592 B you're getting five channels of good sounding mic pres if you decide to use it in this way, which is really the only way I'd recommend using it. You can use it as a mixer if you choose, but it's options are limited this way. I've found the pres on the 1592 B to be of good quality and to be useful on most applications, as I don't think that they would necessarily be suited best for any one situation.

The Altec Lansing 1592 B mixing amplifier is a pretty rare piece of equipment, as it isn't one that I have seen around too often. I would think that if you did find one, that it could be had at a pretty cheap price, and if this was the case I'd recommend picking it up. Even though they aren't the best sounding mic preamps in the world, considering that you're getting five of them in one unit, the 1592 B is a great deal for those who will find it...
Les Altec Lansing 1592 B est un amplificateur de mixage analogique et préamplificateur micro. Il est particulièrement bien conçue, car elle dispose de cinq canaux, chacun avec leurs propres paramètres. Je suis pas sûr de la connexion qu'il a, comme celui que j'ai utilisé était déjà récolté et acheminé à travers la baie de brassage, il n'y avait donc aucun besoin de faire toute connexion à l'arrière de celui-ci. Cependant, je crois qu'il a XLR pour chacun des canaux. Il est en effet sous forme de rack et prendra quatre espaces.