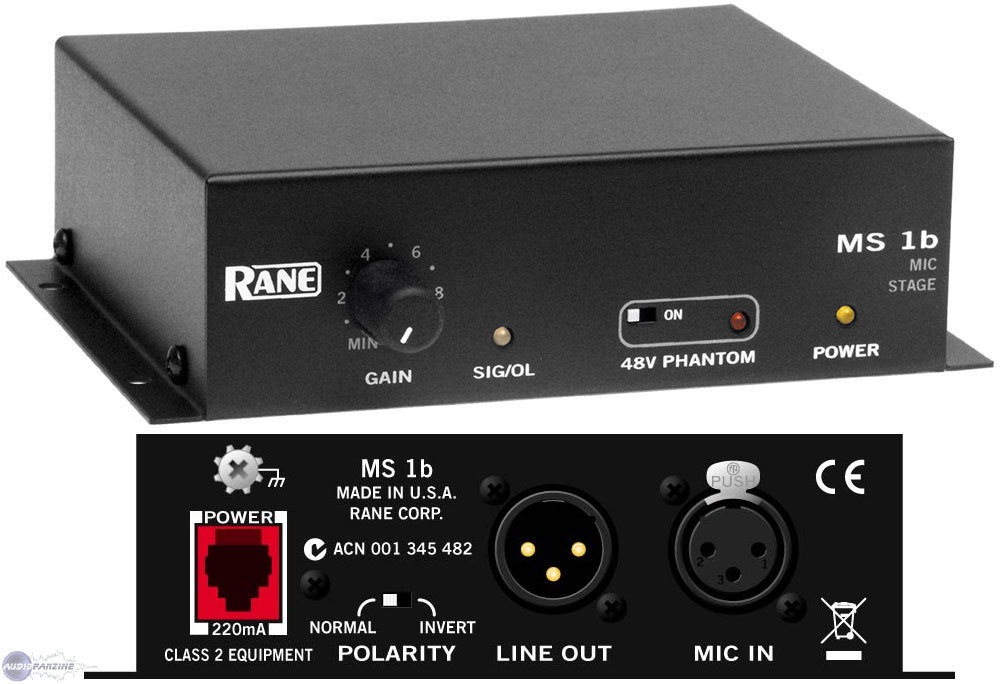 (contenu en anglais)
Afficher la traduction automatique
Afficher l'avis original
The Rane MS 1 is a single channel microphone preamplifier for use in the recording studio. It's a simple preamp, coming in a unique casing that doesn't take up much space even though it's not traditionally rack mountable. There are a few different versions of the MS 1, including the MS 1B and MS 1S, the latter of which this review is for. The MS 1 also has XLR connections for microphone input and line output. It has built in 48 volt phantom power as well.

You really don't need to know much to operate the Rane MS 1. It just has a knob for setting the gain, and from there you're pretty much good to go. The only other things that you need to know about are when to engage the phantom power and also the polarity switch that it's in the back. The box has LED meters to indicate when phantom power is on as well as for when a signal is being passed and when it's being overloaded. I haven't seen the manual for this...

The sound of the Rane MS 1 is about average, as it's nothing incredible to write home about but will definitely get the job done in a home studio situation and beyond. It's a pretty clear sounding mic preamp for the most part, but lacks a certain depth that the best mic preamps will have. It's definitely better than most stock audio interface preamps, but I guess that's not saying too much. I've used the MS 1 for recording electric guitar, but also have tried it for some other applications. Electric guitar was really the only application that I tried where I thought it excelled...

The Rane MS 1 isn't exactly a popular microphone preamp since it's not all that well known, but it's still a decent enough mic pre that it's worth scooping up if you can get one or two at a cheap price. I almost bought a set of them a while back but decided to spend a few more bucks on some better preamps. If you're just looking for preamps that don't sound terrible to add to the back end of your studio, the Rane MS 1's will do the job, otherwise I'd probably recommend springing for something a bit better.
Le Rane MS 1 est un préamplificateur micro monocanal pour une utilisation en studio d'enregistrement. Il s'agit d'un préampli simple, à venir dans un boîtier unique qui ne prend pas beaucoup de place même si ce n'est traditionnellement pas montable en rack. Il ya quelques versions différentes de la MS 1, y compris l'1B MS et MS 1S, dont le dernier est pour cet examen. L'une MS a également des connexions XLR pour l'entrée microphone et sortie ligne. Il a construit dans 48 volts alimentation fantôme ainsi.