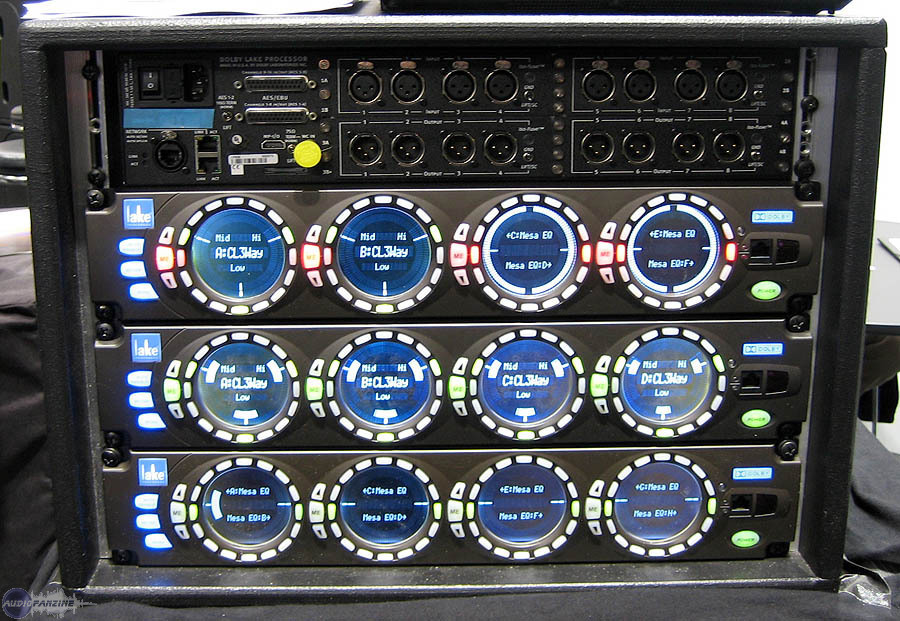 So, unless you have been living under a rock somewhere, you know about the Dolby Lake Processor — at least you know it exists. Quick review: The Dolby Lake grew out of a unit called the Lake Contour, also known in a modified form as the Clair I/O. It was the first speaker processor to offer the ability to run using a wireless tablet computer so you could make adjustments from anywhere in the room. It won a ton of awards and eve-rybody wanted one. Sidenote: The development was led by legendary audio designer Bruce Jackson — and Bruce does not make stuff that sucks.

The Gear
Fast forward a few years and Lake is acquired by Dolby Systems. Yes, THAT Dolby. Another pro audio company that was made a part of a much larger group that specializes in consumer electronics and big installs. Dolby had always owned a piece of Lake, but this buy made them a subsidiary. We all wondered what it would mean for the Contour and most of us were pleasantly surprised when, shortly after the buy, Dolby announced the release of the all-new Dolby Lake Processor. A kind of Contour on steroids that looked like something out of a sci-fi movie.

When Jackson and his partner David McGrath started developing this project more than 10 years ago, they had the advantage of two things that gear developers almost never get — a clean slate and substantial financial backing (Clair backed the original design). Jackson had been working with computer games, which had given him a whole new take on interacting with digital audio. Which, you will see, had an effect on ease of use.

The Dolby Lake is basically everything the Contour, the Clair I/O and the Mesa EQ were — all shoved into one box (except some of the presets that are written just for Clair cabs, which no one can rent so why bother including them). In addition to all of the normal stuff you would expect to see from a speaker processor, we were told at the introduction that we would be able to “stack” EQs in ways we had never done before and that even using the tablet we would hear those EQ changes immediately as if we were using a real analog EQ.

We were excited enough about it to spend $350 to send one of my full-time guys to take the training class on the Dolby Lake. Oh, and I sent him with a P.O. for two units. We were ready to go. Turns out that the unit was so popular so quickly that we were not able to get one at the time — in fact, it took more than a year to get one for this review. So, as excited as we were about the Dolby Lake — especially after my guy took the class and came back telling us everything it could do — there was work to do and gigs on the books and we could not just sit and wait.

We ended up buying a few of pretty much every other controller on the market to figure out which way to go. We purchased three of the new BSS Minidrives, two dbx 4800s and one XTA 428 to go along with the XTA 226s we already had. Object of the game? Figure out what controller and manufacture worked best for us. Then get rid of the rest. But, Dolby was not used to the cycles of the pro audio biz — especially the touring side of it — and timed the release of the first production run at the same time that most soundcos, large and small, are making purchases for the all-important summer season. The result was that we just could not get one, and I know the same thing happened to others. We reluctantly dropped Dolby from the "race."  We have since committed to one controller for everything and have sold everything else off and  put 10 new controllers in service last year and plan on many more this year.

About four months ago, we finally got the Dolby Lake into the shop! There were still a few “hiccups” to deal with — we were sent the Dolby as requested with a 4-in and 8-out configuration to match what we already had in our drive racks, but the laptop they sent us had one version of soft-ware, and the manual was for a different version. Once we got the stars and moon and sun aligned and Dolby got us the right “parts,” we were able to take it out and use it.

The Gigs
The Primm Valley Arena. New Year’s Eve. B.B. King. Thirty-two VerTec boxes in four hangs, plus 16 subs and four frontfills. After load in, we had some time to play. I put the Dolby on one side and the “house controller” on the other. We load in our VerTec settings. At first, just like our initial run with the Dolby in the shop with a ground stack of four VerTec, the Dolby was thin-sounding compared to the “house unit.” We were both relieved and disappointed at the same time. All of the hype. All of the “we don’t have one for you to try yet.” All of the anticipation. Is it just another product with great marketing, but not so great performance?

NO! It simply needed a bit of tweaking (as any controller would need). Different controllers have different personalities. The same adjustment made on two controllers using the same speakers and amps can make one system sound great and pretty much suck on the other.

We picked a track on Christina Aguilera’s CD Stripped. I chose this disc because her voice can show harsh characteristics in hi freq drivers, but the tracks have an overall smooth, full-range tone. After about 100 pans back and forth, I was sure that the squint lighting bitch was ready to rumble. Whatever! Do we care what lampies think? No, we don’t!

One pet peeve I have with “high end” controllers is crappy front panel controls. If you don’t have a laptop...GOOD LUCK! Yes, you can get into most of them without a computer, but they are hard to drive and very hard to follow. There is not a real industry standard for speaker controller “lingo.”

Now, in the shop we used the computer Dolby sent — very sexy graphics and easy to use. So, back to my pet peeve. I purposely left the computer in the case, and spent no time in the shop with the controls on the front of the unit. I wanted to go at it blind. I want a controller that is as easy to use with or without a computer. I mean, what if your computer crashes or gets ripped off while you’re stuffing your face?

How did it go? Man, how easy can it be?  As you pick the section you want to work with — for example, input levels — every button on this sexy beast required for input-level tweaking lights up. Almost like following the Yellow Brick Road, except it’s digital and has lot more colors that just yellow. I was able to access every single feature I needed simply by using whatever buttons lit up. The single downer difference between say a dbx 4800 and the Dolby is that the screen on the dbx actually shows a graphic representation of whatever you are working on. The Dolby does not. You get “6 DB, 3 DB, 2.4 DB.” No, real “look” at what you’re doing. But you do get that functionality with the computer software and, besides, the Dolby just plain looks cool.

Back to the gig… As we panned the CD back and forth and with a little tweaking (we used SMARRT to tweak the house rig already), the Dolby had a far smoother high end without sacrificing the punch in the low-mid response. Overall, I was pretty blown away by it. Two or three minutes of tweaking and it was show-ready — much quicker than other controllers I have used (and I have used a bunch…)
Bottom Line? Every now and then a heavily-marketed piece of gear hits our business that actually stands up and delivers, at least, what you ex-pected and, in this case, way more. We are very happy with the controllers we have, but with another large purchase in front of us later this year, I would definitely consider The Dolby Lake. (Dolby says that they are currently able to meet production requests for the unit.) And you will be see-ing this technology around even if you don’t buy the actual unit. For example, Lab.gruppen just released a new series of amps with what is basi-cally a Dolby Lake built right in.

I could spend a lot of time telling you all of the crazy, cool tech features this unit has, but there is not enough room in a single magazine article to do it justice. Instead, take one for a drive and make up your own mind. It REALLY doesn’t suck.