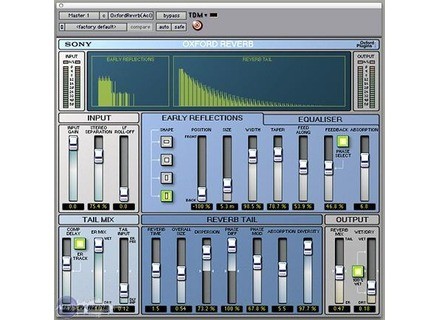 Sonnox Oxford Reverb
5
Afficher la traduction automatique
Afficher l'avis original
The Sonnox Oxford Reverb plug-in was not a problem to install at all as I simply followed the standard installation instructions.  I didn't have any compatibility issues or any other similar problems as the whole process was pain free.  The interface of the software has a good amount going on, but is split into sections so it is easy to decipher.  The plug-in has parameter sections for input, output, early reflections, EQ, tail mix, and reverb tail.  Each of the sections has its own sliders and the plug also has graphs to show both the reverb tail and early reflections, although I'm not sure how useful they can be.  I've never had a chance or a need to look at a manual as this plug-in is easy enough to figure out on its own.

I am currently running Sonnox Oxford Reverb on a Mac Book Pro that has a 2.2 Ghz Intel Core 2 Duo processor and 4 GB of RAM.  I am running the plug-in strictly in Pro Tools LE 7.4 that runs with a Digi 002R or a Digidesign Micro Box, depending on where I am working from.  I can't say that I've had too many issues running the plug-in within this configuration as it has always run pretty smoothly for me.  However, it is important to note that I use the plug-in on auxiliary channels to save processing power, which is what I do with all reverbs and delays.  As long as you have a system that you are currently able to run some plug-ins on well, I don't think that this reverb plug-in will present you will any performance problems.

Sonnox Oxford Reverb is a very versatile reverb plug-in, more so than most of them out there.  It has a very clean sound and is capable of emulating all sorts of types of reverbs.  I love having so many parameters to work with because it gives me complete control over my sound and makes it possible to get a wide array of different reverb tones.  The price of the plug-in is more expensive than most, but for professionals looking for a go to reverb plug-in, the price is reasonable.  If you are in the market for a high quality reverb plug-in I would definitely recommend checking out this plug-in along with a variety of other ones, including TL Space, Softube Spring Reverb, and Digidesign's reverbs.

Sonnox Oxford Reverb
5
Afficher la traduction automatique
Afficher l'avis original
This was a pretty expensive reverb plug-in for me to get, but I'm glad I did. it wasn't hard to install once I got it. It was totally compatible with my Pro Tools 8 LE system (though it was 7 at the time that I installed it). The setup was pretty basic, and though it has a lot of parameters, it isn't that hard to get started using. It'll take a few minutes to get a feel for what everything does but after that it's a breeze. I haven't really needed to read the manual as I'm better at learning hands-on, but it is informative and will give good descriptions of all the settings and functions.

I've yet to have a problem running this software, it works fine for me. I have a macbook pro with 4 gb of RAM, and I don't often have problems with plug-ins (with a few notable exceptions).
The plug-in has a lot of adjustable sections. You can adjust the amount of input and output with some really specific controls such as volume, separation, and low pass filters. There's also separate controls for the early part of the reverb and the tail, as well as an EQ. Each section has a wide variety of parameters, giving you the potential for intricately detailed reverb.