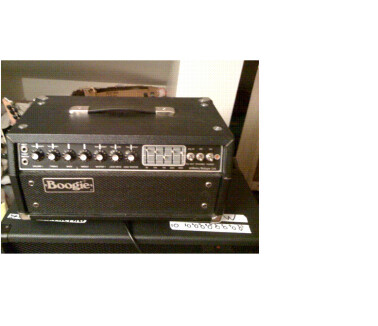 (contenu en anglais)
Afficher la traduction automatique
Afficher l'avis original
The Mesa Boogie Mark II is the second or updated version of Randall Smith's original Boogie amp that was called the Mark I. It featured channel switching between a clean and a lead sound, as well as various pull switch controls to change the structure of the EQ. Many models were equipped with a 5 band graphic EQ to further modify the sound as well. These can be found in head and combo forms. The one I have had the most experience with is a 1980 Mesa Boogie Mark IIA combo 60w version (non simulclass) with the graphic EQ as well as onboard reverb that is loaded with two 6L6 tubes.

Setting up a Mesa Mark series amp can be daunting if you're not familiar with how the controls react. Being a longtime user of a Mark III when I first tried this amp, I decided to try a few of my Mark III settings to see if it sounded good. However, this was to no avail. I was pretty dejected after spending about half an hour to try and dial in what I thought the amp was capable of, but it just wasn't happening overall. I realized that the original Mark IIs really weren't nearly a high gain amp as the later model Mark IIC+ and Mark III, which are known and praised for their unique and complex high gain raunch. It sounds more like a Fender that's been smoothed out and has a bit more EQ done to it... great for a classic thing for sure.

I tried this amp with various Gibson and Fender guitars. The two channels are meant to be clean and lead. The clean channel reminded me a lot of an old school Fender amp. Not quite as refined as a blackface Fender or some of the newer Mesas like the Lone Star, but it has a unique gritty quality that is all its own. The lead channel tops out at what we would call medium gain today. It's great for Carlos Santana or perhaps some Journey type stuff, but it doesn't begin to get into some of the higher gain stuff without help of a pedal or other such source of distortion. That being said, that mid gain tone that it could achieve was killer when dialed in with some reverb and compression added, but it was a very mild sound compared to the Mark IIC+ or Mark III amps.