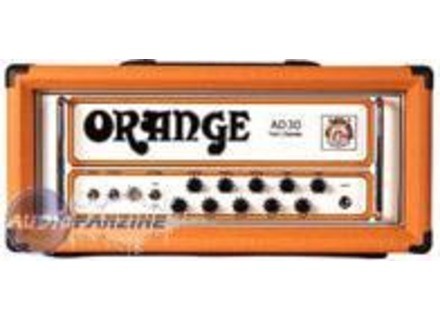 Orange AD30H
5
Afficher la traduction automatique
Afficher l'avis original
This is a tube amp made by Orange, one of my favorite amp manufacturers. The amp only has one channel, but it is versatile enough that it will work for most rock situations. There are two inputs, for low and high sensitivity. There are knobs that control Master volume, gain, treble, bass, and middle. There are 30 watts of power, which doesn't seem like much, but you don't really need that much wattage anyway.

Getting a good sound with this amp is easy. Some players might be put off by the single-channel, but I don't think it's anything to worry about. If you have an overdrive/distortion pedal that you really like, you can simply dial in a clean sound that you really like, and use the pedal. If you are really into the distortion that the amp provides (which is fantastic, by the way), then you could simply dial in a great distorted sound and use your volume knob to roll back some of the gain (this works great on my Strat, I'm not so sure that every guitar will work this way). There's no need for a manual unless you run into trouble with the tubes, something breaks, etc. but even then you'd probably have to take it in to fix it.

I really like the sound of this amp with my Stratocaster, as well as my Les Paul. I've heard guys like Stephen Malkmus (Pavement) use a Jazzmaster with this amp to great effect as well. I really think that there are great clean sounds as well as great distorted ones to be had with this amp. It's got great clarity but also can rock really hard when you need it to. The clean tones have a nice edge to them as well.

I like the versatility that this amp has for only being one channel. It runs a large gamut in terms of tone. It's a little pricey but most good things are nowadays. It's totally worth it if you are sure that it's the sound you want. A lot of great indie rock bands have used these amps to great effect, and alternative/rock bands tend to do the same. I wouldn't recommend it to blues/jazz/R&B guys as much, given it's tendency to be dirtier. Overall a fantastic product.
C'est un ampli à lampes faites par Orange, l'un de mes fabricants ampli préféré. L'ampli a un seul canal, mais il est suffisamment polyvalent pour que cela fonctionnera pour les situations les plus rock. Il ya deux entrées, pour une sensibilité basse et haute. Il ya les boutons de contrôle que le Master volume, gain, aigus, basses et moyennes. Il ya 30 watts de puissance, qui ne semble pas beaucoup, mais vous n'avez pas vraiment besoin de cette puissance de toute façon.

Orange AD30H
5
Afficher la traduction automatique
Afficher l'avis original
This is the flagship amplifier that reminds me of how amazing Orange amp sound. They continue that line and tone of British grind and do it very well. I have played every single Orange amp thet they make and this one by an inch or two is my favorite.

The coolest thing about this amp is the two completely different signal paths for the two channels. This is great if you need to EQ the channels differently for gigging or live uses. Plus it essentially makes it two amps in one.

The first channel is more of lower gain channel and it can get crunch when the gain is increased. You will get a great classic rock tone ala AC/DC or Led Zeppelin.

This amp is similar to the Tiny Terror with the El84 power tubes, but this has a tube rectifier which gives a solid tube grinding tone.

The first channel is going to have a little more low end thump and a bit more low mids in the circuit. Where as the second channel gets a little more hairy in the mids which gets more saturation and higher mid focus.

The tone from this amp is sensational. Two independent channels gives the user an assortment of tonal variations. I like channel one for a bluesy classic rock tone that sounds great with a Strat as it is increased in the bottom end. So having a nice bright guitar in this channel gives a creamy warm tone fitting for some Cream or the Who tones.

If you are in channel two try it out with a solid Les Paul guitar and a either a Marshall 4x12 or an Orange 4x12, but make sure either use a nice greenback Celestion type speaker or a Celestion Vintage 30 type speaker. I how found that the V30's sound a bit better with the Orange Amps but a nice greenback will get a little more high end focus and a little more sizzle on the gain structure.

I'm a fan of the tube rectifier options in class A amplifiers. I think it adds a nice chewy gain that El34's don't or can't really accomplish. I love El34's but sometimes it is nice to add this type power tube distortion in a mix. It adds a bit of depth to the tone and gives a 3D element to the sound. I find it to be a little fatter in sound but not as focused. The sound is not as aggressive but seems to be a bit fuller in structure.

I would recommend this amp to anyone looking for a solid amp that will not give you any problems and will sound great every time you click it on. If you need an amp with a great tone and great features this is one to look at. Priced at around $1600 for a new one. This is great price for an amp of this caliber.
C'est l'amplificateur phare qui me rappelle combien étonnante ampli Orange. Ils continuent cette ligne et le ton de broyer et britanniques le font très bien. J'ai joué tous les Thet Ampère unique Orange qu'ils font et ce un par un ou deux pouces est mon préféré.