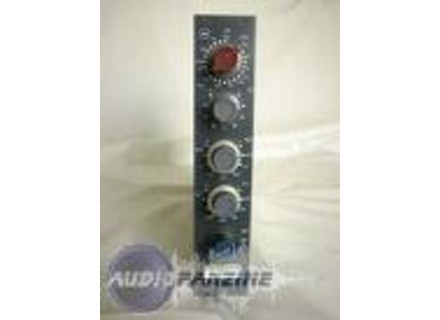 Neve 1066
5
Afficher la traduction automatique
Afficher l'avis original
The Neve 1066 channel strip is analog microphone preamp with built in EQ.  It has the same basic make up that can be found on most Neve models, but of course does have its own quirks and characteristics.  The unit isn't rack mountable as it is a module that will fit into a larger console.

Using the Neve 1066 isn't difficult at all as it has a pretty basic configuration that is ubiquitous amongst Neve channels strips.  The unit has a knob for gain as well as three bands of EQ and a high pass filter.  Beyond this there isn't all that much more that you would have to get used to and I think that even those without any experience with Neve gear will be able to adapt rather quickly to the 1066.  A manual isn't necessary and I haven't seen one anyway so I can't say for sure if it would be helpful or not.

The tone of the Neve 1066 is pretty much as good as it gets in terms of both a mic pre and EQ.  It really just sounds that good.  It is great for any and all applications as I have had great results using it with vocals, guitars, drums, and piano.  Neve makes the best consoles in my opinion and therefore makes the best mic pres that money can buy.  While this won't exactly color your sound, it does have a certain 'Neve' tone quality that is so highly sought after for its extremely rich tone quality.

I've been using the Neve 1066 on and off when I get access to it for about four years.  Overall, this is a classic channel strip that has major tone quality and is easy to use.  I love the sound of just about any Neve tone and even though the 1066 has a few different specs than other channel strips, it has the same distinct tone that has become an industry standard.  To get the Neve 1066 you will pay a pretty penny, but is worth it if you are looking for a top quality.  These aren't the easiest channel strips to find, but if you come across one I would definitely recommend looking into it as it is just as good as any channel strip out there.