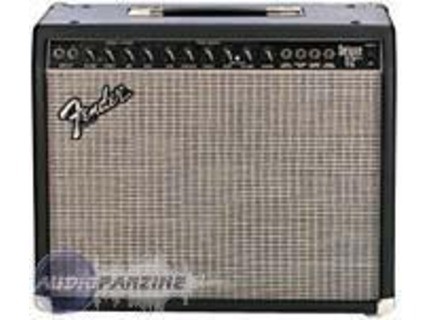 Fender Deluxe 112
4
Afficher la traduction automatique
Afficher l'avis original
This is a solid-state Fender amplifier. It's supposed to replicate the tube version of this amp, the Hot Rod Deluxe. This amp has two inputs (one of which is high-impedance and the other low). It also boasts two drives, one of which is Normal and the other Drive. The normal drive boasts a volume knob as well as three-band EQ, while the drive channel boasts a Gain and Contour knob as well as a two-band EQ and volume knob of its own. Rounding out the front panel are four 1/4" connections (foot switch, preamp out, power amp in, and headphone out).

This amp is actually pretty easy to use overall. The manual explains all the features of this amplifier beautifully, including the extra stuff like the impedance differences and how to do the preamp out, etc. Even if you just want to plug in and play, the amp is a breeze to use. You may need to fiddle with the controls for a minute to get the sound you want, but that is pretty much the case with all solid-state amps.

For a solid state amp, this one is really good. It's one of the better Fender solid-states that I've seen. The best thing about this amp is its extremely low noise output. It's one of the least noisy amps I've used. The drawback is that it has a really thin sound when used clean. However, the clean channel can be used to run pedals and is actually a great choice if you have some noisy ones. This makes it a great choice for death and black metal, as the pedals can be run through these clean channels to get virtually noiseless heavy tones. The drive channel itself is also not bad for metal, though it'd work better for more classic-sounding metal or even hair metal.