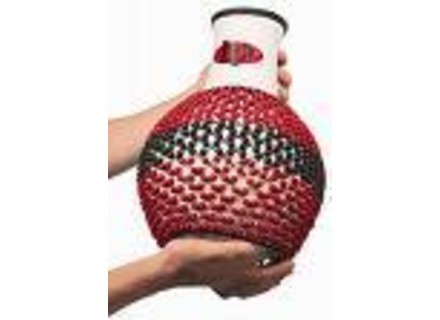 But for those of you who are not inclined to dry your own gourds and string your own chekere, this is not a bad instrument.

The instrument is fiberglass, as opposed to a real gourd, which creates some issues from the start. The fiberglass shell makes the instrument ring a little too long, and the sound is slightly superficial and bright. The sound hole on this instrument is a little too small in my opinion, giving a choked or constrained sound. The beaded pattern is very nice, but the sound of the beads against the shell are a little too bright and cutting to pass for an authentic instrument. I am however, used to playing authentically produced (by myself or a master artisan) chekeres which a fiberglass mass produced instrument will never be able to match.

Compared to other fiberglass chekeres on the market, this one is probably the best however. The other models I've played (Meinl and a few minor brands) actually tend to be either too heavy or too large to be shaken effectively (or both!). Any fiberglass instrument will have a different and longer tone and a brighter bead attack, and if I were to recommend a fiberglass instrument to someone I would recommend this one.

There are however, some smaller companies (if you can even call them companies!- most are just individuals with Internet stores!) who sell authentic chekeres for prices comparable to that of the mass produced LP chekere (sometimes even less!). These instruments produce a VASTLY superior sonority and a much more authentic look and feel.

So basically, go look for a real instrument on the Internet- you may be able to find a real instrument that will sound better and will be at least close to the same price (between 150 and 250, roughly). And if these all sound like they cost too much, get in contact with me and I'll explain how to make your own chekere- then you'll know why they cost so much!
Tout d'abord, ce n'est pas rien comme la vraie chose .... bébé.