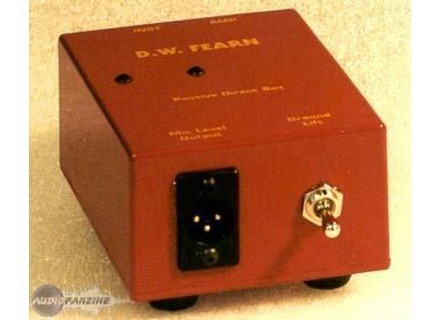 D.W. Fearn PDB Passive Direct Box
5
Afficher la traduction automatique
Afficher l'avis original
The D.W. Fearn PDB Passive Direct Box is a simple piece of gear that I have used in a recording studio setting. I guess you could use this for a live show too, but this would never be something I'd recommend for the application since it is really too expensive for that sort of use. It's pretty much got the simplest possible make up for a DI box, consisting of 1/4" connections for instrument input and amplifier output as well an XLR output for sending the box to your console and/or audio interface. It isn't in rack mountable form.

Beyond making your connections into the D.W. Fearn PDB Passive Direct Box, there isn't anything that you need to know. As long as you understand basic signal flow and/or have set it a direct input box before, the PDB will be as easy to use as any other DI box out there. The only other feature that it has beyond it's basic connections is a ground lift switch, which comes in very handy. A manual for the PDB isn't necessary at all...

The D.W. Fearn PDB Passive Direct Box has a very impressive sound quality overall. I've really only used the PDB one time for getting a direct signal from a Wurlitzer electric piano. We also had the Wurli going to a speaker cabinet, so the PDB wasn't the only thing that I was using to record the source. Honestly though, I could have only used this DI box and have gotten a very respectable sound. I always like the sound that an amplifier will add though, as there are certain qualities of a sound that a DI box won't pick up. However, the PDB generally does a very good job of picking up a full direct sound and is definitely suitable for use on it's own if you don't want or have the means to record with an amplifier.