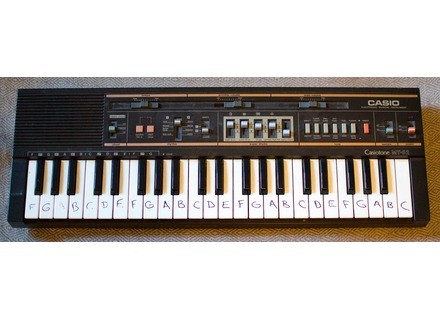 where it really shines in the "super drums" section, where you got 3 variations for bass drum, snare, tom/congas , hihat and chord variation.

There's not a dedicated appregiator, but some chord variations contain appregiator patterns.

the drums are semi-analogue and sound pretty nice and retro, and the tones are decent.

similarly to such simply keyboards, its super easy and practical to use.

In my ears and in the way I used this keyboard the was a serious problem: there is not a separate chord and rhythm volume and the chord sounds where far too low compared to the rhythm.
So the chord sounds were kind of lost when playing. So this is a serious defect given how powerful the drum sounds are.

I solved this with circuit bending, and modded it through un-muffling the analogue filtering , allowing the chord and bass sounds to be played in all their range. Now it sounds awesome and a little bit cheesier, when the chord/auto accompaniament is playing. IMO this keyboard has so be modded so as to hear the auto chord patterns.

This is also a highly bendable casio mt, and very practical and easy to experiment on too, so its really recommended.

I like the sound of casio mt's so I dont circuit bend them for "noise" kicks, or fucking them up, only to enhance them and make them more playable and variable. Especially in this occasion where I solved the chord volume imbalance through bending and filtering.

Not unjustly 80s Casios still hold up the name of some of the best candidates for circuit bending.

Additionally, the shared love for their sound is not just a hype, the hype was only a reason they became so popular out of the blue and the prices got up.