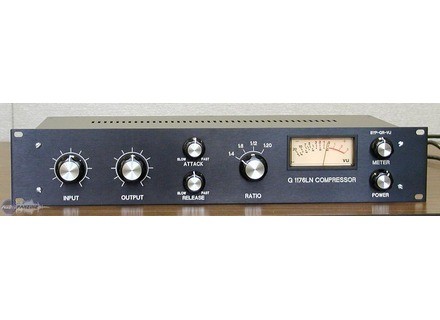 Gyraf Audio G 1176LN
5
Afficher la traduction automatique
Afficher l'avis original
The Gyraf Audio 1176LN is an analog compressor that is usually seen as a do it yourself kit. In other words, it starts as a kit, but they are often seen already being fully assembled. This aims to be a direct copy of classic Urie 1176 compressor that is still found in virtually every professional recording studio. I don't know much about assembling this yourself as I've never done it as I've only used it after the fact. It's got XLR connections and is rackable, taking up two spaces in a traditional casing.

Like the original, the Gyraf Audio 1176LN isn't hard to use. More or less the 1176 has been the model for most compressors to come after it, using these same parameters - input (threshold), output (gain make up), attack, release, and ratio. I've seen this both with buttons for setting the compression ratio and as a knob. It will also have a meter which can be programmed to show a few different things. I haven't seen a manual for this, which I assume would include how to build this with the given parts.

The sound of the Gyraf Audio 1176LN is just like the real thing. While I haven't had a chance to actually sit down and shoot the two of them out side by side, I've used an original 1176 a great deal and from memory I'd say this is pretty darn close to the same sound. Maybe you'd find small nuances in the two if you were to shoot them out, which would most likely depend on how the 1176 was built as you can always mod it and can never know if one was built properly. Having said this, the one I tried out definitely seemed to be quite reminiscent of the original, which is that of a tried and true professional compressor.

The Gyraf Audio 1176LN is a great compressor for those out there who are handy with building electronics. Of course those who might not be able to build it themselves can still benefit from this by getting these on the cheap from someone who does build them. It's an awesome analog compressor to have in any studio, even in a home studio where it might be your only one. I don't know how hard this is to build, but either way it's an option worth looking at when compared to the Universal Audio 1176.
Le Gyraf Audio 1176 est un compresseur analogique qui est généralement considéré comme un do it yourself kit. En d'autres termes, il commence comme un kit, mais ils sont souvent vus d'ores et déjà entièrement assemblé. Cette initiative vise à être une copie directe du classique de 1176 Urie compresseur qui se trouve encore dans pratiquement tous les studios d'enregistrement professionnels. Je ne sais pas beaucoup sur le montage vous-même comme je l'ai jamais fait car je ne l'ai utilisé après le fait. Il possède des connexions XLR et est rackable, prendre deux places dans un boîtier classique.