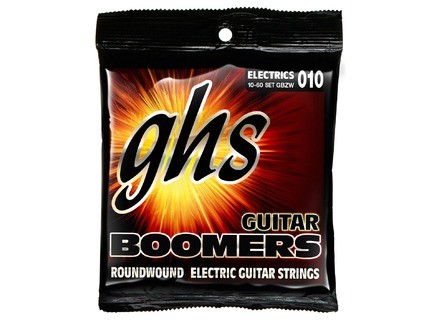 GHS Guitar Boomers Zakk Wylde Signature
Afficher la traduction automatique
Afficher l'avis original
The GHS Boomer Zakk Wylde strings come in 10-60 gauge to accommodate modern down tunings ala Black Label Society and other heavy modern guitar sounds. I wasn't sure what to expect with these but I knew I couldn't go on with tuning the Low E to a B and having basically a thin rubber band as my low string.

The GHS Zakk Boomers solved that problem and provide a hybrid set of strings that allows you to enjoy the gauge up top that you can still bend with ease but still have the chunk down low of a thick string and thus a thick sound. The 60 on the bottom is a bit hard to get used to depending on what you are used to but I found it a bit of a learning curve. My fingers had to callace up a bit before I could be truly comfortable. Once that happened, these were a great solution to playing modern rock and accommodating modern drop tuning. As with all GHS strings, my experience has been exceptional and I have had few problems. I have never broken a GHS string at a gig when I change them often. As a matter a fact I have only ever had one failure period on a low E right out of the pack. This was obviously an anomaly.

I would also suggest getting the 11-60 set for certain applications. Speed metal is a great genre for this set as there is very little lead work and when there is it relies on little bending technique. This set is durable and can withstand a pounding. Whichever set you choose, I highly suggest you try these out if you have the need. They are not a good choice for playing classic rock or even 80s. I would also suggest not putting these on a trem guitar that is typically set up for 9s. Trust me you will need to add a spring or two to the trem to keep it at center, trust me I tried! Stick to a good solid body Les Paul or something similar and these can be a great tool and perfect for down tuning.

I have a Gibson Gothic Studio Les Paul from 2001. I saw Black Label Society in a local bar supporting the disc Stronger than Death. The venue was small as the band was not yet established; I was right up front to watch Zakk belt out awesome tone...I was immediately driven to acquire such a lethal, brutal, and clear sound.
I slapped these 10-60 strings on my Les Paul.

The tonal value was increased dramatically for heavy hi gain rhythm riffing. I went from wondering where Zakk got that tone to being immersed- all due to the string gauge. lighter/medium gauges just don't cut it- not enough power and too much floppiness. The heavier gauge really provides a tight modern metal sound. Lead tones ooze with fullness and quality. I play with an aggressive approach, so adjusting to the thickness was not a big challenge- it actually kept my vibrato in check and prevented the over bending I usually wander into with lighter strings.

But there is a huge negative side...all these years, I tried to set my guitars up on my own. I'm no expert, but I understand the basic mechanics of intonation, string adjustment, truss rod, etc. But I couldn't get my Les Paul into proper intonation. The band I was in played a lot of straight ahead pop/punk/rock, so I basically tuned for the song I was playing. A few times I played with other people and attempted to play larger 6 string and jazzier chords- the intonation was so awful it made it impossible. I finally brought my guitar in for a pro setup.

The luthier- well respected in the area and works with top pros- said that the guitar would not ever be intonated properly with these strings, unless I was willing to drill new holes. I believed this to be accurate due to my own explorations into not having enough room on the adjustments for intonation. Instead, I choose to go with 10-52 gauge and that solved the problem. Now the guitar plays like a dream!

I asked how Zakk can do this, and the reply was that Zakk probably has a fleet of techs making custom adjustments. Bottom line, I have about 50 packs of these 10-60 in storage; while I love the tone, it looks like they are going to eBay.