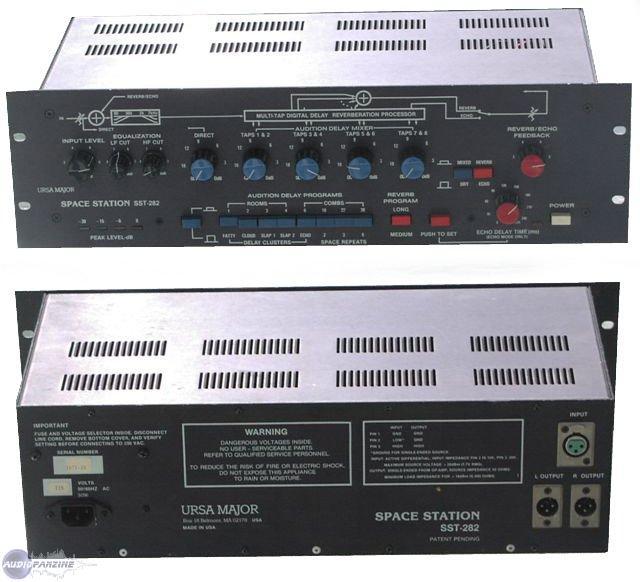 (contenu en anglais)
Afficher la traduction automatique
Afficher l'avis original
The Ursa Major SST-282 Space Station is a echo/delay/reverb unit that is pretty hard to come across from what I can tell. It's got a ton of versatility and although I'm not sure when these were made, it definitely looks pretty old. It's got an XLR input and stereo XLR outputs, and is powered up by a regular power cord. It is indeed a rack mountable piece of outboard gear.

The configuration of the Ursa Major SST-282 Space Station is definitely a unique one. For starters, it's got a series of buttons that allow you to choose between different types of preset delay and reverbs and a series of knobs to control your delay mixes. It then has a reverb/echo feedback knob, an echo delay time knob, and smaller knobs for input level and high and low cut. There are a few other parameters that can be manipulated here, but getting a real feel for how the SST-282 works will happen with putting in the time with it and checking out the manual for sure.

The sounds that are possible with the Ursa Major SST-282 Space Station are varied, as the device is extremely flexible. I've used it mostly on electric guitar and for a small amount of vocal effects, but any time you might be looking for some delay or echo, the SST-282 will be able to do the job for sure. In general it has a clean sound, but where it makes it's living is on it's ability to get interesting sounds that are hard to find elsewhere. The starting points that it offers up with the buttons are definitely cool, but I've gotten some crazy sounding effects with the SST-282 that go way beyond these more traditional tones...