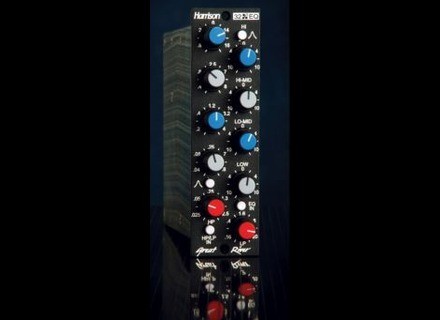 Great River 32EQ
5
Afficher la traduction automatique
Afficher l'avis original
The Great River 32EQ is a reissue of the equalizer found in the Harrison 32 Series consoles, and as far as I know, both parties had a hand in designing this new model. The 32EQ is made up of analog components, boasting four bands and both a high and low pass filter. It isn't rack mountable in a traditional space, but rather will fit into a 500 series lunch box style rack.

There isn't really anything that you need to know about the Great River 32EQ that is out of the ordinary. Each of the four bands has knobs for gain and frequency selection. The only weird thing about the 32EQ that threw me off for a second was the way they numbered the frequencies, but users will soon see how it works as it isn't complicated at all. The high and low pass filters have a button to turn them on a knobs to choose the frequency at which you would like signals to pass. I haven't seen the manual for the 32EQ, but I think it is easy enough to use on its own where you don't need one.

I have not used the original Harrison 32 Series consoles, so I cannot compare the Great River 32EQ to its original, but will say that regardless of what it is modeled after, the 32EQ is a great sounding equalizer. It is up there with the cleanest sounding that I've heard, which is always what I'm looking for in an EQ. Some engineers like when an EQ adds something to your sound, but I only want my EQ to do exactly what I tell it, and that is what you get with the 32EQ. I used the 32EQ on a whole slew of different applications within the same mix, and the mix came out shining bright as can be. Of course like all signal processing, it will only be as useful as you make it...

For such a reasonably priced piece of gear, the Great River 32EQ sure gives you a lot of bang for your buck. Today more than ever I think the way to go for equalization is to pick and choose the modules you like and put them in something like the 500 series rack, and the 32EQ would be a great choice for any studio owner to have. They are cheap enough where you could have a few of them without spending much money at all. While the price may still be a bit much for home studio owners, smaller studio owners need to keep in mind that you're going to have to pay to get great gear, but everyone once in a while you get a piece of gear like the 32EQ that combines top notch tone with a reasonable price...
La Grande Rivière 32EQ est une réédition de l'égaliseur trouvés dans les consoles Harrison les 32 séries, et autant que je sache, les deux parties avaient une main dans la conception de ce nouveau modèle. Le 32EQ est constitué de composants analogiques, vantant quatre bandes et à la fois un filtre passe-haut et bas. Il n'est pas montable en rack dans un espace traditionnel, mais plutôt s'intégrera dans un rack 500 repas style de la série boîte.