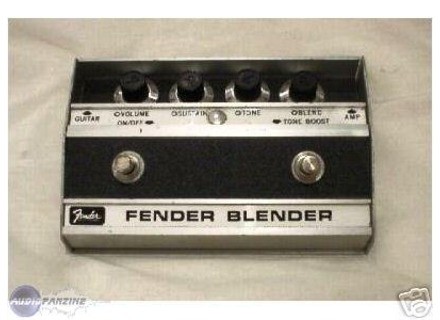 Fender Blender (Original)
5
Afficher la traduction automatique
Afficher l'avis original
The Fender Blender is a fuzz and octave pedal that was originally made in the 1970's but is now available as a reissue. I've only used the reissue and not the original, so unfortunately I won't be able to compare the two throughout this review. The pedal has pretty simple characteristics, with 1/4" connections for input and output. It can be powered by either a 9 volt power supply or battery, as it has a compartment for a battery. It isn't rack mountable in any way as it's a pedal.

The make up of the Fender Blender is generally pretty simple to follow. The pedal has two switches - one to engage the effect/bypass, and one for tone boost. It's also got parameters for volume, sustain, tone, and blend. Those are all the parameters available on the Fender Blender, which is really more than enough to get a wide array of tones here. A manual isn't necessary in my opinion, but I haven't seen it so I can't speak to it's make up.

The sounds that are possible with the Fender Blender are pretty awesome, as it's a great mixture of fuzz and octave sounds, which really go hand and hand here in this setting. It's also got a tone boost which makes the pedal all that much more versatile. The fuzz is really thick sounding, and I actually like it best for lead sounds as you can get a ton of sustain with it. I've used the pedal with other Fender products, a '76 Fender Twin Reverb and a Fender Jazzmaster.