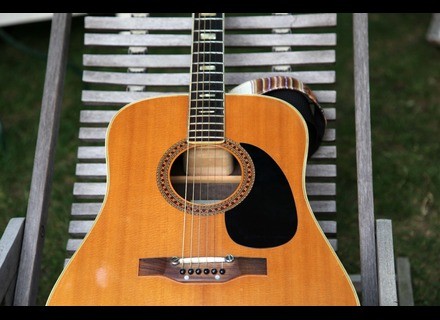 Epiphone 6830
5
Afficher la traduction automatique
Afficher l'avis original
The Epiphone 6830 is a jumbo acoustic guitar. I believe these guitars where made during the early 1970’s, but I’m not sure on the exact dates of production. I’ve used this guitar a bunch in the studio as it’s a main stay for one of the studios that I just started working from. It’s a great guitar for recording! I don’t know what this guitar is made from but it has a nice woody quality to it. In addition to it’s beautiful sound it has an awesome look! It’s not acoustic/electric so you won’t find any pick ups here.

The playability of the Epiphone 6830 is really high as it’s not only a fun guitar to play, it’s easy to play too. It has something about it that makes you feel comfortable and at home playing it. The neck feel perfect and chords are fluidly played. There isn’t any opportunity to change the sound since it’s all acoustic, but I think most will be quite happy with the results anyway.

While nice and full, the Epiphone 6830 has a sound that will still cut through your mixes very well. Having only used it in a recording environment, I can really only speak about it in terms of this. It has this full sound without being boomy like some acoustics and still has a very tight and crisp high mid range thing going on. It’s one of the nicest sounding acoustics for simple open chords that I’ve recorded with.