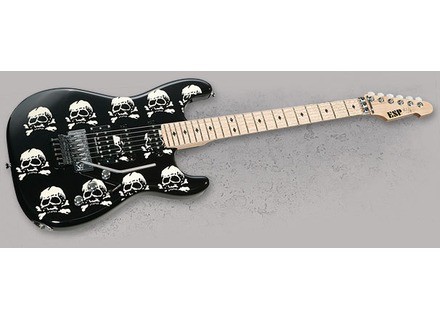 ESP Michael Wilton
5
Afficher la traduction automatique
Afficher l'avis original
Michael Wilton has been one of the main guys behind Queensrÿche. For those who don't know, that was one of the best 80s progressive metal bands, and while they're a bit of a joke now, they were a force to be reckoned with back in the day. Michael had a really cool signature model released, and this is one of his few sigs he's had. The guitar features an alder body with a bolt-on birdseye maple neck, 24 extra jumbo frets, diamond inlays, a special glow in the dark finish, an original floyd rose, HSS configuration, one volume, two tones and a five way switch.

The glow in the dark skulls was really fun to play with. I put it on the lights for like 30 or so seconds, and then I went into a dark room. It was pretty cool to see the skulls jump out. However, it doesn't last that long. It's kinda like a glow in the dark sticker that everyone got when they were kids. The fretwork on this was great. There were no issues with the ends or any issues with the frets being partially crowned. The neck felt wonderful, just like every other ESP out there. All in all, it's a very solid guitar with few faults to it.

The guitar has a JB in the bridge with some ESP singles in the neck and middle. The JB in the bridge is great for pretty much anything. You can go from jazz to death metal with this pickup without too much of an issue. It's not the best thing at all genres, but it can do all genres fairly well. The neck and middle pickups were pretty good. They didn't really jump out at me as amazing singles, but they delivered in terms of a solid single coil tone. I really liked the in-between positions. They delivered a great clean tone. The tone knobs also helped control the brightness.

ESP Michael Wilton
4
Afficher la traduction automatique
Afficher l'avis original
Michael Wilton is one of the guitar players for the old progressive band Queensrÿche. They were big in the 80s but not so much now. Wilton is an old school shredder and his signature guitar is equally old school. This guitar goes back to the original super strat template. You get an alder strat body with an HSS pickup configuration. The neck is maple with a maple fretboard. The fretboard has 22 jumbo frets. There is a locking nut up top for the Floyd Rose. The tuners are locking as well so this thing is like triple locking. The body is finished black with these funny glow in the dark skulls. I would imagine the glow would wear off pretty quickly in a live situation. The bridge pickup is a Duncan JB and the neck and middle pickup are just normal ESP single coils.

The guitar feels nice and soild. The neck bolt is angled for a bit more upper fret access. The frets are nice and big you can really dig in. The guitar is very light overall. Superstrats when done right play as good as any guitar out there.

This guitar has a very versatile sound thanks to the JB and the single coils. The JB is one of th ebest all around pickups out on the market. The Seymour Duncan JB can do just about any type of music in any type of guitar. You find these pickups in Jacksons to strats and everything in between. Whatever you play it can do it. It has a nice open sound with a good amount of compression and really brings out the tone of the guitar. The singles in the neck and middle add some twang to the mix. Mixed in with the JB you get some extra clarity on the thick humbucker sound.