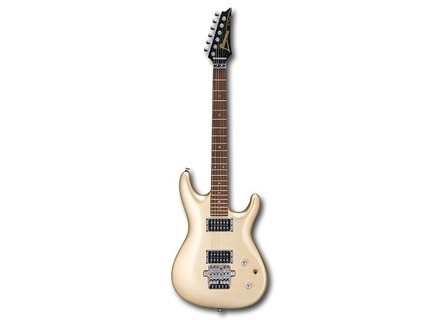 Ibanez JS2000
4
Afficher la traduction automatique
Afficher l'avis original
Those of you who ever wanted to have that JS look but with a hard tail bridge will probably be interested in this model. The guitar also has a unique fixed bridge in that it'll actually stay in tune, unlike certain other fixed bridge guitars out there. The guitar has a basswood body with a maple neck and a rosewood fretboard, 22 frets with dot inlays, a special fixed bridge that's similar to a floyd, two DiMarzio humbuckers, one volume, one tone and a three way toggle switch.

The guitar itself is put together pretty nicely. It seems to weigh a touch more than a normal JS, but that could just be this particular guitar. Whether that leads to actual additional tonal properties, I can't say for sure. The neck on this feels great. The ends are nicely beveled, and the frets themselves are crowned properly. I was able to get some nice action on this with the bizarre bridge. The bridge itself acts just like a floyd rose, only you can't move up and down with it. You have the fine tuning capabilities, but you lack the ability to do any of those special floyd rose signature trademark sounds.

The guitar sounded pretty good, but it didn't sound the exact same as the normal JS guitar. I honestly believe it's due to the construction of the guitar with the different bridge and lack of the spring cavity route. The FRED in the bridge has some great harmonics and cool overtones. Those overtones really pop out at you once you start adding some gain. The PAF Pro in the neck is a trademark sound of the rack guys from the 80s. it's a very clean and powerful pickup that's open sounding and not compressed. It's great for those running through tons of different effects processors, but it might sound a touch sterile through a stock Marshall.