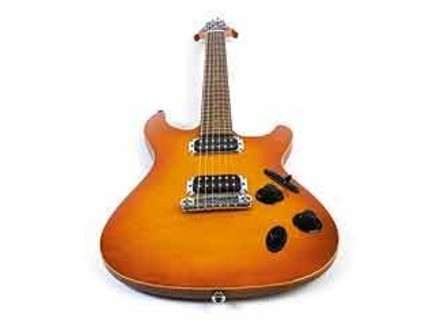 Ibanez SC420CM
4
Afficher la traduction automatique
Afficher l'avis original
Around the mid to late 90s, Ibanez decided to make some guitars that were going to rival the PRS line up. During this time, PRS started to gain some major success, so it was only natural for them to go after them. This guitar was more of the mid grade version. It has a mahogany body with a maple bolt-on neck and a rosewood fretboard, 22 frets, dot inlays, a hard tail bridge, two humbuckers, one volume, one tone and a five way switch.

The guitar was put together pretty decently. The frets were nice and level, albeit they had some wear. The ends were nice and round, so no issues when moving your hand up and down the neck. One interesting thing about this is that it has a 25.1'' scale, which is kinda odd. I'm not sure why they didn't mate it a 25'' scale, but I assume it had to do with their metric measurements being converted more than anything else. The nut on this needed to be recut as it was snagging the strings. Whenever I would bend on the treble strings, I could feel it bind. Not a huge deal, but it would probably take about 40 to 50 bucks for a luthier to do.

The stock pickups in this were the standard stock pickups you always find in Ibanez guitars. Some people dig them, but they're just not for me. The bridge pickup was a bit dull and didn't seem to have the response that higher end pickups have. I'm not someone who pushes boutique pickups, but I generally prefer something from the DiMarzio and Duncan line up than what most guitar manufacturers have. The neck pickup was a bit bright in this for whatever reason, and I found myself reaching for the tone knob to help cut back on some of the treble. However, that meant that I'd be constantly fiddling with the knobs whenever I'd switch between the neck and bridge.