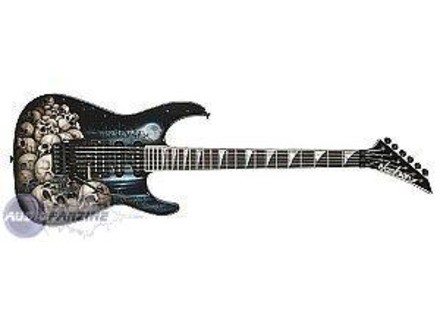 Jackson DK2 Dinky Skulls
4
Afficher la traduction automatique
Afficher l'avis original
The Dinky DK2 is probably one of their more popular Dinky models. This one in particular features a special graveyard/skull scenery painted on it, and it looks great. It can be a bit too "metal" at times given what's going on, but I'm sure most people who are going to buy this guitar are more into metal than any other genre. The guitar has the following specs:

The guitar was put together quite nicely. The first thing you look at is the finish. There were no issues with this graphic at all, but I believe it might actually be a graphic that was placed on top of the guitar rather than actually being air brushed. I'm not really an expert in this. The floyd on this is actually a licensed floyd rose that happens to be a Schaller clone. It's a fairly good bridge, but I almost wonder at times if the real Schaller is a little better. The fretwork ont his is fairly solid, although the USA models tend to be a touch better in terms of the beveled ends of the frets. The neck joint was nice and tight, so there were no issues there.

The guitar has a Seymour Duncan JB in the bridge with two STK1 singles in the neck and middle. The JB in the bridge is the all-around pickup that can do pretty much any genre you can think of. If you want to play everything from blues to death metal, this is your pickup. It isn't perfect, and it can get a bit bright at times, especially in this configuration, but it's still a very solid pickup, and there's a reason why so many guitar manufacturers utilize it. The STKs in the neck and middle are pretty cool, and they're hum canceling too. The one thing worth noting is that they're not exactly the highest output pickups in the world, so while they work quite nice for cleans and low/mid gain stuff, they can be a bit of a pain for soloing with high gain.