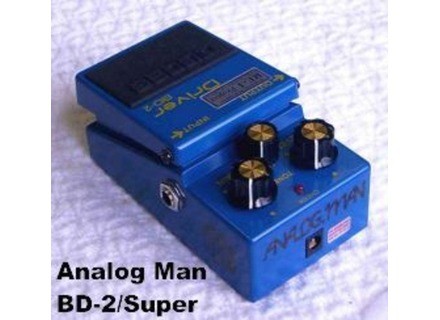 Boss BD-2 Blues Driver - Modded by Analogman
5
Afficher la traduction automatique
Afficher l'avis original
Most people out there who have tried the BD-2 know that it's a pretty solid pedal. You can get a very nice overdrive with the pedal, and it can be a nice alternative to the standard tubescreamer that you hear on so many other albums out there. That said, it could use some improvement, and Analogman is here to help. His main mod is the BD-2/Super mod which helps improve pretty much everything about this thing. It still has the same three knobs and operates the same way, so no difference there.

Boss pedals are inherently some of the most reliable and robust pedals out there. I could throw this thing off of the empire state building, and I bet it would still survive with barely a scratch. That said, I do not endorse throwing your pedals off of buildings. I'm sure some moron out there will do that and blame me for injuring somebody later on... The pedal really doesn't look any different on the outside. In fact, the only real way you can tell that it's modded by Analogman is via the sticker on the pedal. Aside from looking inside, you'd probably never know. I can't comment on the manual, but this pedal is easy enough to use without having to look at the manual, especially considering all the example settings are now moot.

One word of warning: Do not turn all of the knobs on full. If you do this, you'll get some nasty squealing. That said, you really shouldn't ever turn up all your knobs to max on this thing. It's mainly the tone knob that'll cause the squealing to occur, and I find that'll be way too bright. The pedal now sounds more like a transparent boost instead of that middy overdrive kind of sound that you hear from standard tubescreamers. This can be a good or bad thing, depending on what you're looking for. The tone knob on this is a lot more useful, and the overall pedal just sounds a lot better, in my opinion.

Boss BD-2 Blues Driver - Modded by Analogman
4
Afficher la traduction automatique
Afficher l'avis original
Analog man or Mike has been rebooting old distortion pedals to make them more user friendly in today's music world. He has been modifying pedals of all kinds to much more pleasant sound such as true bypass and eliminating noise issues or just repairing old worn out pedals. Mike has made a name for himself with users such as Aerosmith and even the Edge from u2 has been known to use his pedal mods before.

This is the Blues Driver pedal from Bos.. This pedal is used to capture that smooth overdrive that players such as Jimi Hendrix and Stevie Ray Vaughn gets from boosting a nice cleaner amp into overdrive. This pedal has some issue and one of those is a usable distortion tone, true bypass, and noise.

It doesn't get much easier than a three knob pedal. Gain, Level, and Tone and there isn't much to figure out. Setting this thing up for a good sound can be very difficult since it won't sound good, unless you have the analogman mods done to it.

Here is what happens when you have this mod. You get a more usable distortion tone. You get an increase in the distortion. The overdrive comes back more smooth and creamy then it is out of the box from the Boss Roland factory. The chips inside are replaced with better condition chips that allows for better use of the circuit. The hole thing is really redone for optimum performance and sound.

You can use this with a Fender STratocatser now with ease. You will get a more singing tone and fatter tone ala this pedal then you would the stock version. The stock version is sterile and thin in comparison to this thing. The mod does exactly what the final intention was,...to have a usable overdrive that blends well with your rig.

By it self it come in around $90 but modded you are almost going to double that if you by new modified. I suggest you get this mod because it is well worth the price of admission. It is almost double the price but for a pedal that has this type of circuit is going to cost that much or even more from some other manufacturers. This mod is worth every penny if this is your style of overdrive.

I would recommend this pedal only if it had the mods. Otherwise it is pretty useless out of the box. It does sound fantastic once repaired. So if you had extra time and some extra cash try it out and if you don't like it I would go for the TS9 which would be a similar taste to this pedal.
L'homme analogique ou Mike a été le redémarrage vieilles pédales de distorsion pour les rendre plus convivial dans le monde la musique d'aujourd'hui. Il a été la modification des pédales de toutes sortes pour son beaucoup plus agréable, telle qu'un pontage vrai et en éliminant les problèmes de bruit ou tout simplement réparer vieilles pédales usé. Mike s'est fait un nom pour lui-même avec les utilisateurs tels que Aerosmith, et même l'Edge de U2 a été appelé à utiliser ses mods pédale avant.