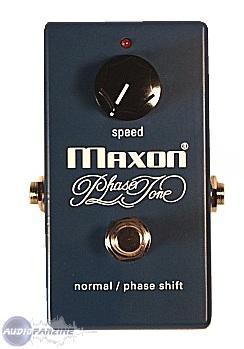 (contenu en anglais)
Afficher la traduction automatique
Afficher l'avis original
The PT999 is an oldschool type phaser, basically like the old orange box from the seventies. I really dig the look of this pedal, nice color

It is a simple pedal although there are some tricks under the bonnet. Basically, you have just the rate control for the phaser but on the inside there are 2 little controls you can turn with a small screwdriver. You can set the Q and depth of the phaser. I checked them out but left them in the original position after trying to tweak it a bit. The little controls are set at the factory, not sure how they do it but the pedal sounds at its best with their suggested setting.

1 control, how hard can it be? Set the range and play away. It will get you a darker phase sound that is close to the orange phaser from the seventies. It's a fun pedal to play with. Although there are 2 small dials on the inside, I don't think the manual mentions them, I wonder why...

The phaser sounds great, I a/b-ed it with a bunch of others and really liked the sound. I was using it in my rack system, work just fine except for 1 thing. Switching the pedal on, or the loop in my case, I was losing a bit of volume. I tried rectifying it with the internal controls but that didn't work out. I could make the pedal sound brighter and then it would cut through a bit better but the sound wasn't as nice. I think there's a mod available for this volume issue but in the end I swapped mine for another phaser.