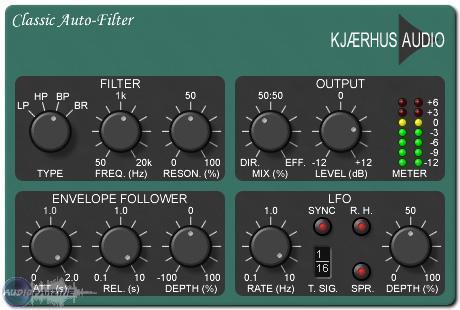 (contenu en anglais)
Afficher la traduction automatique
Afficher l'avis original
The Classic Auto-Filter is a free plug-in designed by Kjaerhus Audio, a company that has a whole line of these 'Classic' plug-ins that are indeed free. The plug-in is for Windows platforms and comes in VST format. I'm not running it any more since I'm no longer running my DAW on a PC. There isn't anything out of the ordinary going on when it comes to downloading and installing this software, as it is a pretty straight forward process as long as you have a compatible system. The interface of the plug-in is a bit more in depth when compared to the other Kjaerhus Audio plug-ins, but it's still easy enough to figure out how to use. It's got sections for a filter, an LFO, an envelope follower, and an output section. No manual is necessary, nor do I think that they made one any way.

When I was running this plug-in a few years ago, it was in Cubase SX. I'm now running Pro Tools LE on a Mac, so I'm unable to run the Kjaerhus Audio Classic Auto-Filter plug-in. I used to run it on a Hewlett Packard Pavilion dv8000 lap top that had a 3.0 Ghz processor and 2 GB of RAM. The plug-in ran just fine within this configuration, as it always ran pretty smoothly without any issues. It's hard to say how well this will run on any given system, so I'd recommend just trying it to see how well it runs.