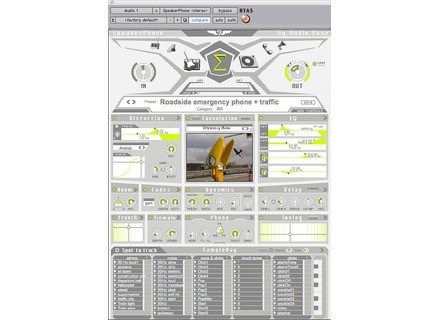 Audio Ease Speakerphone
4
Afficher la traduction automatique
Afficher l'avis original
The thing that I love about the Audio ease Speakerphone is that you can place any sound you are working with in basically any acoustic space that you want it to be in all in real time and with visuals. Being that when I first purchased this plug in it took me some time before I could fully understand it; it was the first type of plug in that I have work with that had this type of abilities and was completely new to me. Since then I have used hundreds of times and upgraded it not too long ago. The original Audio Ease Speakerphone has allowed me to create cleaner mixes by getting certain sounds out of the way to make room for other sounds.

This plug in works with a Mac and a PC but on my main studio PC is where I used it the most because that is where most of my mixing goes down at. It took me a few weeks before I was done playing around with this plug in (because it was fun to experiment) then I was ready to really start working with it effectively. I have also used this plug in for post production purposes for video and short films that I do from time to time for local artist and groups to really add some depth and width to all music and any thing that I really wanted to add it to.

Audio Ease Speakerphone
5
Afficher la traduction automatique
Afficher l'avis original
Speakerphone is amazing. It instaled without any problems, and i had no compatability issues. The steup is a breeze, takes about 10 minutes to do. I bought my copy off of a friend, and he had lost the manual so i never got one, but even without one i was able to figure out how to work Speakerphone without a problem.

I use a cheap Dll PC running Windows XP and have never had a problem. Everythign has worked perfectly to date.

I love this plugin! I have been using it for about 2 months and can't get enough of it. Speakerphone is one of the best things you can spend money on. Basically, Speakerphone is a plugin that emulates all types of speakers and the environments they are located in. There are hundreds of them in the plugin, whether you want your vocal to come out of a car stereo or a toy robot in a bathroom, Speakerphone has got you covered. But that’s just the beginning; Speakerphone can be used to create real life environments, such as a subway station in Germany, or a busy restaurant thanks to the sample bay at the bottom of the plugin screen. I have used this feature many a time to add ambience and character to my music. There are really no downfalls about this plugin, other than possibly the price because it retails around $500, but trust me it’s worth it, once you own this plugin you will find so many places to use it, you will have to stop yourself from overdoing it. Another great thing about Speakerphone is that everything within the plugin is recordable, meaning you can turn effects on and off within a recording whenever you want. Personally, I love turning the distortion on just a little bit to add some flare to the presets, which are awesome by the way. You can customize anything you want, choosing the speaker, environment (rooms, outside, subway station, arena) and by playing with the effects and sample bay. However, you rarely have a need to do that thanks to the hundreds of amazing presets included. Speakerphone has every kind of speaker, this includes vintage guitar amps for all you shredders. How does a classic amp played in a auditorium sound? Buy Speakerphone and find out. It is one of the best investments you can make, but it today and see how it effects your music.
Haut-parleur est incroyable. Il instalé sans aucun problème, et je n'avais aucun problème de compatibilité. Le Steup est un jeu d'enfant, prend environ 10 minutes à faire. J'ai acheté ma copie hors d'un ami, et il avait perdu le manuel donc je n'ai jamais eu un, mais même sans celui que j'ai été en mesure de comprendre la façon de travailler du haut-parleur sans problème.

Audio Ease Speakerphone
5
Afficher la traduction automatique
Afficher l'avis original
Audio Ease's Speakerphone is an extremely unique plug-in, designed to emulate ambient environments. I didn't have anything to do with the process of installing the plug-in since I don't own it and used it at a studio that I've worked at. However, I've yet to have any problems with the plug-ins. Speakerphone gives you a serious amount of control over your sound, with all sorts of features and sections. It allows you to do everything from choosing what type of speaker you'd like to use, to the type of mic and what type of room you're in. It also has more traditional setting controls like distortion, compression, EQ, delay, modulation, an LFO, gramophone, and the list goes on and on. There are also all sorts of presets to choose from. If you're a beginner you might want to have the plug-in around, but I didn't feel that I needed it at all.

The system that I've the Audio Ease Speakerphone plug-in on is Pro Tools HD based, so as you can probably guess I didn't have any issues running the plug-in. Having said this, since there is so much going on in the interface, it will take up a good amount of processing power on a non-HD system. You should keep in mind though that this isn't the type of plug-in that most people are going to be using on every channel - for me it has been something that I use one or two instances of at most within a single session, if at all...

Audio Ease Speakerphone
4
Afficher la traduction automatique
Afficher l'avis original
I run this on Ableton 8 and Logic 9 and have had no compatibility issues. The manual is clear and efficient and I recommend it as this unit has a lot of options. The general config and setup is relatively simple but again, there are a lot of sounds and options so it can be a little convoluted. Well, this is kind of a special plugin so the typical functions is kind of hard to pin point. All the functions are for the most part in front of you.

So far I have had no issues using this software. It seems to run very well and the "alteration" of the sound is pretty amazing and accurate. Yes, the software is very stable. I have never had any crashes or hang ups and the sound quality is always clear and accurate. Well, for what it does, it does it very well. Imagine any sound or instruments coming out of any random electronic audio device, and you get exactly that. I especially like the telephone samples, they are by far the ones I use the most. I have been using this unit for 5 months.

What I like most about this unit is the guys at Audio Ease really took some time and have captured almost every scenario of electronic sound representation you could think of. It truly is remarkable but to be honest, I don't find that I need this to often in the Music recording business. If I were doing movie audio or just sampling things for stock audio, then I would consider this indispensable. But, I only do music work so I find this unit not being used very often. Because of that, I wish I hadn't bought it as it is not cheap. Again, the value of the work for the price is a great deal, but if you aren't going to use it that much, $400+ is a lot to spend. I don't think I have ever had another plugin that attempted to do what this one does so thoroughly. No, I wouldn't buy this again only because it doesn't apply to my field as much as other audio engineers (just my opinion). Maybe if I got a little more crazy in my effects processing I would use this more for interesting dynamic changes in my music.
J'ai l'exécuter sur Ableton Live 8 et Logic 9 et n'ont pas eu des problèmes de compatibilité. Le manuel est clair et efficace et je le recommande car cette unité a beaucoup d'options. La config générale et la configuration est relativement simple mais encore une fois, il ya beaucoup de sons et d'options de sorte qu'il peut être un peu alambiqué. Eh bien, c'est une sorte de plugin spécial pour les fonctions typiques est un peu difficile de cerner le point. Toutes les fonctions sont pour la plupart, en face de vous.