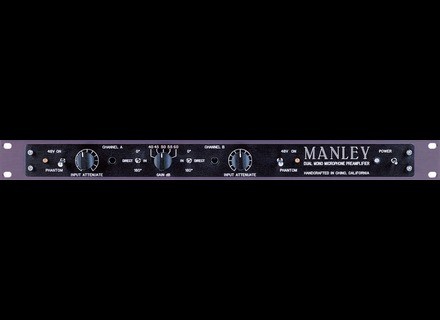 Manley Labs Dual Mono Mic Pre 60dB
5
Afficher la traduction automatique
Afficher l'avis original
The Manley Langevin Dual Mono MicPre is exactly what the name suggests - two mic preamplifiers in a single space rack mountable unit. These are tube microphone preamps and this also comes in a single mic preamp version. It has 1/4" inputs in the front for going direct but also of course features XLR connections in the back.

It's not hard to operate the Manley Langevin Dual Mono MicPre. Each channel has it's own phantom power and a phase reverse switch. Each also has a direct/mic switch. For setting your level, it's got a unique approach, using one fixed gain knob for both mic pres and then input attenuate knobs for each channel. I don't know if I prefer this over a standard mic pre configuration but you have to admit that it's interesting to say the least. Even so, there's no need for a manual.

The sound of the Manley Langevin Dual Mono MicPre puts it up there with the best mic preamps available. It's got a huge sound, and that's an understatement. The preamps will work for any and all applications, but I've only used these as a stereo pair for drum overheads and also for recording vocals, since I don't have the luxury of having one of these at home or the at the studio where I work most consistently. The Manley Langevin Dual Mono MicPre simply sounds fantastic.

The Manley Langevin Dual Mono MicPre is one of the best bang for your buck deals when it comes to high end microphone preamps. You're always going to have to spend a good amount to get good mic preamps, but at least here you're getting two them for a bit more than what it would cost for one for a number of other high end preamps. There is also a version of this that comes with built in EQ. I haven't used it but it's nice to have that option. Anyone in the market for a set of great mic preamps needs to consider these...
Le Manley Langevin Dual Mono MICPRE est exactement ce que son nom suggère - deux préamplificateurs micro dans une unité de rack montable en 1 unité. Ce sont des préamplis micro tube et il existe également dans une version préampli micro unique. Il a des entrées jack à l'avant, mais aussi bien sûr des connexions XLR à l'arrière.