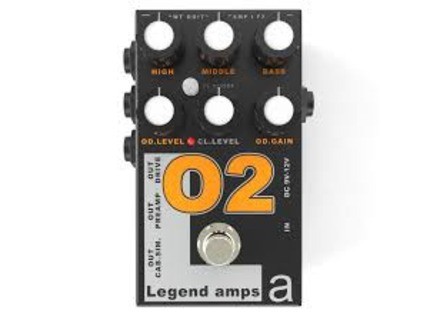 Introducing the next generation of the Legend Amp series of pedals, the Legend II line. Guaranteed to be the most versatile distortion pedals on the market, offering huge tube-style saturated tone in the styles of all of your favorite high gain modern and classic amp heads. The Legend II pedals will accompany the original series, as an enhanced upgraded "PRO" version.

* O2 of the Legend Amp Series II represents the response, characteristics, gain, and tonal nuances similar to that of Orange Amplifiers.

The new II series adds a handful of great new features to the standard version I series.

AMT has added a third output jack for the ultimate in routing flexibility. The Legend II series includes a speaker simulated cab output (for recording), a preamp output (for routing to a power amp), and a drive output (for using in front of a combo amp or head). All three of these outputs can be used simultaneously! Use the different outputs for recording direct and micing at the same time, run different effects through different outputs, or record three DAW tracks all at once. The routing and recording options are endless. The Legend II series of pedals are a studios engineers dream come true.

Another feature added to the II series, is the clean level gain knob, and clean volume boost switch (used only when pedal is in bypass mode). This feature can be used in either of two different ways. 1) As a bypass buffer to maintain proper signal strength through long pedal chains, or 2) As a 2-channel style preamp.

When used as a bypass buffer/booster with other pedals in the signal chain, the user is able to dial in the amount of buffer gain that is added to the output signal. The higher the level of the clean level knob, the stronger the buffered output. This is helpful with long cable runs where signal may be lost/degraded, or even useful for adding that extra kick of boost to your amp. Keeping the knob at 1 o'clock keeps the signal at normal unbuffered level. The second example is using the Legend II pedal as a 2-channel preamp, where the bypass signal will be the clean tone and the overdrive channel will be the engaged tone. By adjusting the clean level knob and by engaging the boost button, the clean signal will be comparable in dB level to the overdrive channel; thus turning the single pedal into a switchable 2-channel preamp.

FEATURES:
- Three outputs (CAB SIM OUT, PREAMP OUT, DRIVE OUT)
- Simultaneous use of all three outputs at once
- Optional clean level and clean boost controls when bypassed (only with CAB SIM OUT and PREAMP OUT)
- LED indicator when effect is engaged