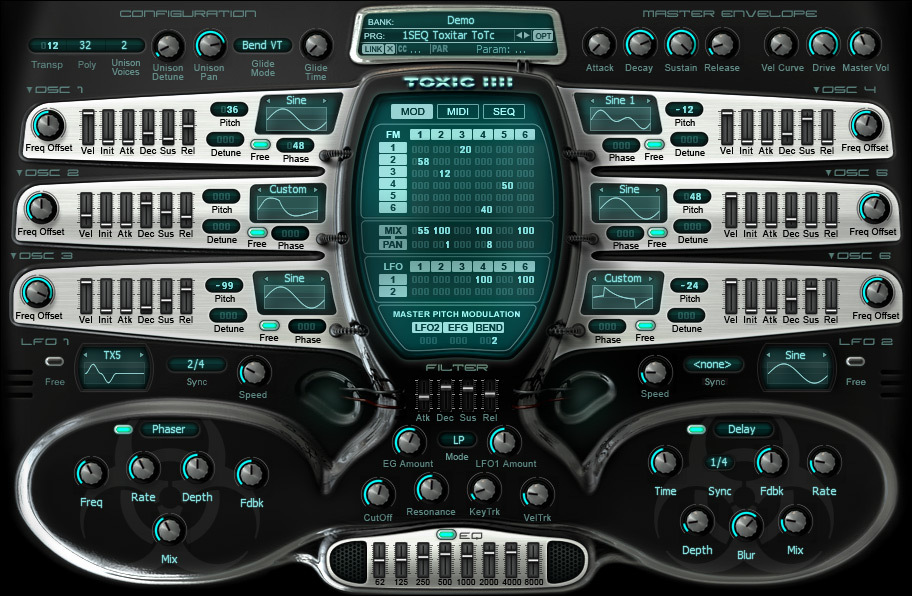 (contenu en anglais)
Afficher la traduction automatique
Afficher l'avis original
BioHazard was a vst that I thought had a lot of potential to be great, it runs smoothly and gives you all of the options to edit and transform your sounds right on one screen, there are no menu’s or other screens you will have to worry about or navigate through. Its all right there on the main vst screen which makes it easy but still difficult at the same time if you don’t know what everything means.

The program was easy to install, the demo version was already installed on my copy of Image Lines Fl Studio. I did need to hit the fl studio message boards for a lot of my questions with BioHazard when I first started using it.

If you are into making trance music, or maybe even some spacey music then I think Bio Hazard is perfect for you. Most all of the sounds are really trancy like though and that’s one thing that I didn’t like about it. I do make Trance and progressive house music from time to time but I don’t think the sounds were versatile enough for me. I wanted to hear some thicker sounds and less spacey ones. that’s where BioHazard fails to me.

Overall, it’s a solid vst that will give you no computer problems or any issues using it. But the sounds selection was a problem for my style of producing. I felt like BioHazard kept me in a box, the way that I know if a vst is good for me or not is if I can complete a whole song right in that 1 vst. BioHazard just wouldn’t be able to do that for me because I like to mix different types of sounds together when I create. But it seems like it would be a great vst for someone who is into trance and hard style music 24/ 7.

(contenu en anglais)
Afficher la traduction automatique
Afficher l'avis original
Image Line’s Toxic Biohazard is a plug in that I didn’t even know existed until one day (a few years ago) I was messing around with some of the demo plug ins and vst’s that came with fl studio 8. I came across Biohazard and thought it was pretty cool. So I decided to purchase it because it really didn’t cost that much directly from image lines website.

Very easy to install and configure, it was made by image line and I used Fl Studio by image line so it all worked perfectly. Also, I purchased it directly from Image Line and already had the demo on my computer so it was basically just a matter of unlocking the full software, because it was already installed (in demo mode) on my computer so there wasn’t a need to reinstall which made it really quick and easy.

You can get some really good synths in Toxic Biohazard, one that that surprised me was the quality of the presets with out having to do any editing or tweaking to them. They are ready to be used in my instrumentals right away. Plus on Biohazard there are a bunch of different effects that you can use right on the vst and add more if you want through a mixer channel. Most of the time I just use the mixer channel for effects though just because that’s what im use too. One thing I wish is that biohazard would come out with way more presets to us paid users. There are enough, but not a lot of them. I like to have a wide variety of sounds to use. Maybe they do have more you might have to just buy them though. But none the less Biohazard with provide you with some cool synths that are really gritty. Its worth the money.

(contenu en anglais)
Afficher la traduction automatique
Afficher l'avis original
With image line's Toxic Boihazard there was absolutely no problem in installation. This is because it comes with fl studio so if you install that properly then of course this will work.
It is a very easy synth to navigate. There are some very nice features on this synth that are easily accessible.
No compatibility issues at all with this vst.
Basically what I am saying is that since it comes with fl studio and that installs on your computer then this vst will be installed with it.

With my production laptop being pretty quick and decent when producing. The specs being 4gb ram and 1.8GHz processor, it does not lag or cause any problems when I am using this vst.
Everything is stable, I have never had any problems due to the vst crashing mid session or anything like that.
I have used it on and off for around 3 to 4 months when producing hardstyle synths.
The performance from this vst is great. I can not fault it at all.

The best thing to me personally with this vst is creating hardstyle synth leads, they are really easy and great sounding on this vst and I recommend it to any of the producers that ask me how to make synth sounds like the ones in the hardstyle genre.
I would recommend this vst to any hardstyle producers out there because the sounds are great.
I have to say that my least favourite thing about it is that I only think synths sound good on it, making bass does not sound that great in my opinion I have other vsts to make bass with so it is not really a problem to be honest but there should be some nicer ways to get a good bass on this synth.
And to say that it comes with fl studio for no extra cost it is definitely worth having a go with to get yourself used to making great synth sounds.