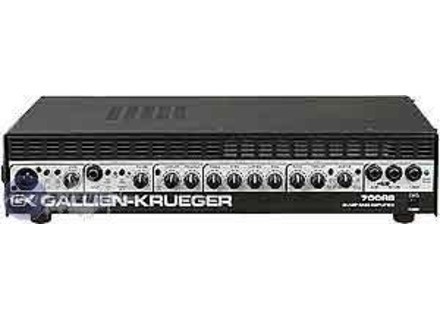 Gallien Krueger 700RB
5
Afficher la traduction automatique
Afficher l'avis original
The Gallien Krueger 700RB is a bass guitar bi-amp head with a big sound and a lot of versatility. The amp has a lot of options in terms of connections, as it consists of an XLR output, as well as 1/4" connections for your instrument input, a send and return and for a tuner, so you're really getting the works with this amp. It also has speaker outputs in the back for sending this to a speaker cabinet. There are actually two amps in here to be used at two different wattages I believe, and while I'm not sure exactly how much it is, it can really get loud if necessary.

In terms of control, the Gallien Krueger 700RB offers up a whole ton of it. While it might seem confusing at first because of all the parameters, I think you'll definitely find that it is helpful in the end. The front panel of the amp has sections for direct out, input, voicing filters, active equalization, bi-amp output, and patch bay. Each has their own set of parameters to work with. The EQ is a four band, while the voicing filter section includes contour and presence control. There are then knobs for boost, tweeter, and woofer in the bi-amp output section, and one for level in the direct out section and one for volume in the input section. As you can tell, there is a lot going on, but once you break it down it really isn't too complicated. The manual is definitely put together well and could potentially be useful for all users.

I've used the Gallien Krueger 700RB in the recording studio as an engineer, not the performer, as I'm primarily not a bass player. The amp was owned by the bass player on the session, and I really only got to use the two times that he brought it in. However, during those two sessions we got some seriously awesome bass tones out of this. He was playing with a Rickenbacker 4000 bass, so we got an extra punchy sound as well. The great part about this amp is that you really have total control over your sound. We took both a direct signal using the XLR output on the amp and also sent the head to speaker cabinet.