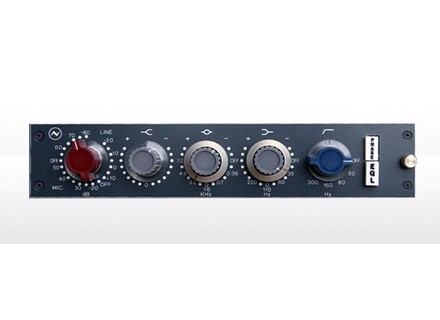 AMS-Neve 1073
5
Afficher la traduction automatique
Afficher l'avis original
The Neve 1073 is a channel strip that is found as a module in a Neve console. I believe that they can be found in a few different consoles, but I've used them in a 8068 console. The console mostly has 31102 modules, but there are four 1073 modules in it for whatever reason as well. There isn't much of a difference between the modules that I can tell, but some have claimed to hear a difference between them. Perhaps I'll need to do a proper shoot out of my own someday. These are analog modules and the types of connections it has will depend on the casing that they're in.

The make up of the Neve 1073 isn't too much different than other Neve modules, so if you know the basic formula you should be able to catch on quickly here. Even if you just have a basic knowledge of channel strips or their individual parts in a preamp and a EQ, this should feel pretty simple to you. The 1073's have a gain knob for setting your microphone's level coming into the pre, and also have a four band EQ, with the middle two being dual tiered knobs to control both frequency and gain. I don't believe you'd be able to find a manual for an original 1073 module.

In terms of sound, it really doesn't get any better than a Neve 1073. You might be able to find comparable channel strips, but I don't think you'll hear anyone saying that they think something is better than a 1073. To me, the Neve sound is the best when it comes to preamplification, and there's a reason that the 1073 is such a popular module. It's easy to use and simply has a killer sound quality all the way around. Both the preamp and the EQ are hands down some of the best I've heard...