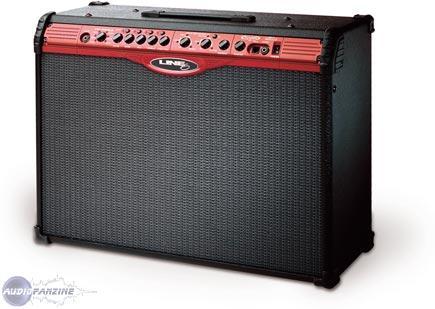 (contenu en anglais)
Afficher la traduction automatique
Afficher l'avis original
This amp is not a keeper amp at all. This thing is a basic sounding solid state amp modeler that doesn't sound anything like the amp modelers it claims to emulate. The tone is extremely thin and metallic sounding.

You get 6 amp models and none of them really are capable of sounding like the tube amps that are very famous and enough so that Line 6 would attempt to model. Not that it is Line 6's fault but the idea of amp modelers is really a humorous joke. The idea that they can emulate digitally a tube amp without tubes is just an enormously huge mistake. Nothing can emulate a real tube sound and feel.

I guess the most authentic sound are the effects. The effects do sound convincingly enough to go ahead make this purchase only for the practice aspect of it. If you are looking for a practice amp that is an all encompassing everything unit then this isn't a bad unit. You would never go on stage with this thing though. This is not a gigging amp. The sound man will laugh you right off the stage and may even ask you to take this amp off the stage and mic up one of the house amps.

This is why I am a bit confused of the reason for 50 watts of power when you will never need to turn this thing up this loud. Well, this amp is not a bad practice amp and with a good guitar it will get you jamming comfortably at home.

I don;t believe that these amps are even offered anymore. I think these have been discontinued to another more modern model. If you find one on the classifieds I can't imagine it being more than $200.

(contenu en anglais)
Afficher la traduction automatique
Afficher l'avis original
Several people who spend much time with Line 6's 212 amps, and probably their 100 to 150-watt heads, seem to come away from the experience confused- it is a high-powered PRACTICE amp, or is it a gigging amp, like most 100-watt amps are? Does anybody really NEED a practice amp with that kind of power? The reality is, it is, at least for the Spyder 1 212, it is a BUDGET gigging amp- if you approach it as such, with an eye towards the limitations imposed by the budget measures it has, you can appreciate and use it for what it is.

This is an all-solid-state amp (all Line 6 amps have been, until the most recent "Valve" series.) It is a multi-channel, Digital Signal Processor (DSP) modeling amp. Line 6 rates it at 50 watts, times two channels, or 100 watts. As to whether that power is "delivered-" well, that is probably anybody's guess- Line 6 does not publish the impedeance of the signal, only that it is "100 Watts (2 X 50) Stereo." Although the amp has 2, 8-ohm speakers, it is quite possible that the power rating is at 4, or even 2 ohms- 100 watts at 4 ohms translates into 50 watts at 8 ohms, 100 watts at 2 ohms would be a 98-pound weakling 25 watts at 8 ohms. This kind of hocus-pocus has been done before- ART did it with their "100 watt" Attack Module Amps, in the very early 90's. Consumers have short memories, so I suppose 10 years was plenty enough time to forget...

Lots of controls- maybe too many. Really, does an amp need three tone controls? It is nice that you can have three effects at once, though.

As far as connections, Line 6 went the exact opposite direction as they did on controls- too few. One instrument in, and a headphone out- not counting the RJ-45 connection for the proprietary floor controlers, two connections, total. Really, would it have broken the budget to include stereo speaker or line-level outs? Having stereo effects when the only speakers you can hear it on are spaced 3 inches apart is kind of pointless- to hear the "ping-pong" delay, you almost have to get right in front of the amp.

Speaking of effects- this amp's got 'em- flange, chorus, tremolo, delay, "tape echo," (which is nothing of the sort

ping pong, and reverb. As mentioned above, great that you can have three of them at once- not so great that Line 6 commits the cheap-amp cardinal sin (and, in the final analysis, this IS a cheap amp)- no way to control both speed and level of the effects. Booooo.

And, boy, is this thing LIGHT. Compared to the standard for 212 amps, the Fender Twin Reverb, this thing almost floats along, feeling like it may weigh HALF as much as a Fender TR. Where did the weight go? There are two 12-inch speakers in it, and MDF is NOT a light-weight building material, so why's it so light? I suspect that, as it has no tubes, Line 6 could get by with a much smaller, lighter (and cheaper) set of transformers. I put casters under this one, and frankly, I don't know why I went to the trouble- it is light enough to be hand-carried with the single handle on the top of the amp.

A good distorted sound is actually achievable- which should come as no surprise, as budget amps are primarily made for the younger players, who are more likely to want lots of distortion. And I mean, LOTS of distortion. The "crunch" and "retro" amp models can deliver more distortion than any three guitarist would really want- and more is on tap with the appropriately-named "Insane" model.

The "clean," "twang," and "blues" sounds are not as usable, sounding a little too sterile and bland. Imagine eating boiled chicken with only salt for seasoning, and you have an idea of what those settings are like. Little of the clean, bell-like chime of a vintage Fender Twin, or the brown-dirt power-tube distortion of a dimed Princeton or Deluxe. Some of that is there, but no one will ever mistake this for a tube amp.

The manual is quite good, but it should include an explanation of the effects, and when they are typically used. If the technical writers are going to hell, it will be for letting way too much blush-inducing praise for "the engineers at Line 6." To hear the manual tell it, they are gods who walk among men. The results tell a somewhat different story.

Being a modeling amp, the Spider 212 works just as well with humbuckers as it does with single coils, but little or no "expression," that one hears with some tube amps, made it through the machinations of those miracle-working engineers. "Sounds," in the form of amp models and effects, are all decent, if un-inspiring. With three tone controls- bass, mid and treble, it hardly matters if the frequency curve is neutral- one advantage of all those knobs is you can EQ the thing until it squeaks- figuratively or literally.

After spending considerable time with the Line 6 Spyder 1 212, I found that acceptable tones and sounds can be coaxed out of it, without much tweaking or work. For the attention-deficit, instant-gratification-seeking youth of today, that probably has sold more Line 6 gear (as well as other makes) than any other feature. I got this amp used, and cheap, and bought it because I want to see, first-hand, what Line 6 amps were like. Overall, I am pleased- you could gig with this amp- it is both loud enough for most club gigs, and has the visual appeal of a twin twelve- and it's on-board effects mean that you need not bring anything other than the amp and you guitar(s.) Having to purchase the Floor Board to access the 12 different groups of settings, and the built-in tuner (which you can not use without the Floor Board) is just mean, but at least, now that the Floor Board is obsoleted by the newer Line 6 amps, the company is blowing out NOS Floor Boards for $50, plus shipping, direct.

And, about that "budget gigging" amp thing: a little too much about this amp says "cheap," but you CAN gig with it, to good effect- but chances are it is not worth the expense of buying a ATA flight case to put it in- just watch Craigslist for another one. And another.