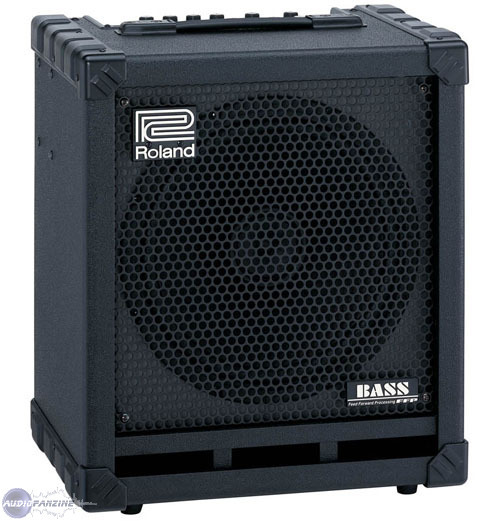 (contenu en anglais)
Afficher la traduction automatique
Afficher l'avis original
This is a digital modeling amp from roland which works using their COSM technology. It's 30 watts and has 10" speaker. It has a four band EQ, compressor, five built in effects, eight amp models, shape switch and finally volume and gain controls. It also has a headphone/line out jack for recording or practicing, an AUX in for practicing along with your MP3 player, a footswitch input to engage the effects and a -10dB pad button.

The eight models are: Super Flat, Octave Bass, Flip Top, B Man, T.E., Bass360, Session and Concert 810. They're all based on famous amplifiers such as the Fender Bassman (B Man) and an ampeg SVT (Concert 810).

The five in built effects are: Chorus, Flanger, T Wah, Delay and Reverb.

Despite having lots of features this amp is really simple to set up to get a good sound. They layout and controls make it very easy to just fiddle about with until you get a desired sound. The four band EQ is easy to use and sounds good even if they're all set to flat.

The single parameter control of the effects in this amp make them very limited I think, I would personally prefer a single effect built in with more parameters to control.

I've used this amp primarily with my Fender Standard Jazz bass and it sounds really good. The only models I use are the Super Flat, B Man and Concert 810 as they suit the sound I'm looking for. I dislike the distorted tones from this amp as I think the COSM modeling is a bit lacking in this department.

As I said previously the effects are pretty disappointing due to the limited control over them, although I find a small amount of reverb from this amp to be really nice.