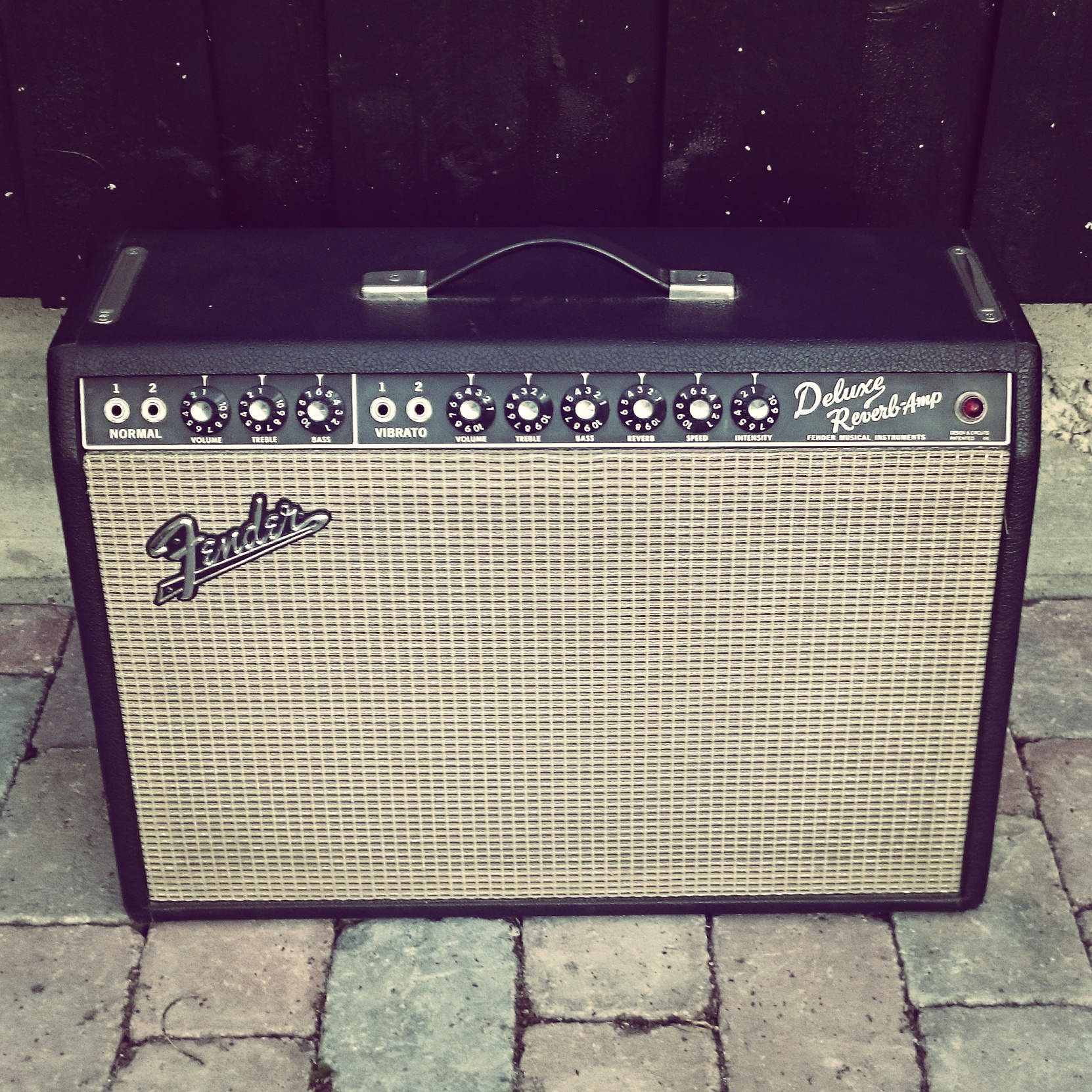 (contenu en anglais)
Afficher la traduction automatique
Afficher l'avis original
This tube amp is currently my favorite amp that I've played. It's a reissue of the original '65 design, with two clean channels (normal and vibrato) and two inputs for each. There aren't any effects loops but there is a good reverb and a sick vibrato that are built-in. They work the same way they did back then, which is pretty basic. There are two volume knobs, a master volume, three tone controls, reverb and vibrato settings that are turned on or off with an old-school gray foot switch. Keep in mind that you have to plug into the vibrato channel to activate the effect.

This thing is great, but it's heavy and delicate. Definitely do not attempt to move it too far on your own, especially if it means lifting it (for your health and the health of the amp!) If you move it and are too rough with it, it will take its time to sound right again. I moved it from my basement to my bedroom (2 flights) and it took about an hour before it started to really cook again. Also, the reverb broke at one point just because the wires popped while I was moving it. That being said, it's worth it if you can handle it right. Getting good sounds out of it is as easy as turning it on usually. Any studio owner who doesn't have one of these needs to look into getting one. I've personally never even opened the manual (never needed to) but I think that most players who can afford it will be able to figure it out pretty easily.

My style of music tends to be more retro rock, garage rock, and alternative/country/folk-tinged rock. I play a '67 strat reissue and I've never heard it sound better through anything else, especially for this kind of music. The sounds range from clean and pretty to bluesy and gritty. The amp can really rip and can cut through in most live settings. When cranked, the natural distortion sound is better than any I've ever heard. There's no dirty channel, so for those who need more heavy distortion, a pedal is the way to go. I never really liked distortion pedals (I preferred distortion straight from the amp) until I tried a Boss DS-1 with one of these amps, and the sound was enough to change my mind about them. I tend to only use that pedal for leads anyway, as the amp on its own is powerful enough to get a phenomenal rhythm sound out of it for any music that doesn't require heaps of gain or feedback. Metal and Punk players are advised to look elsewhere. Anyone into newer indie like Pavement, Wilco, or classic rock like The Band or The Byrds will dig this amp. You may not sound exactly like all of them but the vibe will be there.

I just got this amp and I've never been more thrilled. I was a little skeptical the first time I played one because it didn't have a dirty channel (I am a rock player after all), but after trying it with the DS-1 and my Boss Compressor/Sustainer I ended up buying both the amp and the DS-1. I've played Marshalls, Fender Twins, Vox AC10s, Mesa/Boogie stacks, and Fender Hot Rods, and while a few of those have great sounds on their own terms, this one absolutely tops the list for me. The feeling you get when strumming a chord while the amp is hot is enough to make you smile. I feel like I let the guitar and amp play themselves nowadays, as opposed to the way I used to have to force good sounds out of gear with a lot of effort and by pushing it as far as it could go. Its pretty expensive but I'll say this: don't settle for less. If you try this and know that it's the amp for you, save up and get it. You'll thank yourself in the long run. I'll never regret this choice.
Cet ampli tube est actuellement mon ampli préféré que j'ai joué. Il s'agit d'une réédition de l'original '65 conception, avec deux canaux clean (normal et vibrato) et deux entrées pour chacun. Il n'ya pas de boucles d'effets, mais il ya une bonne reverb et un vibrato malades qui sont intégrés. Ils travaillent de la même façon qu'ils faisaient à l'époque, ce qui est assez basique. Il ya deux boutons de volume, un master volume, trois contrôles de tonalité, les paramètres de réverbération et de vibrato qui sont activés ou désactivés par un commutateur de la vieille école à pied gris. Gardez à l'esprit que vous avez à brancher sur le canal de vibrato pour activer l'effet.