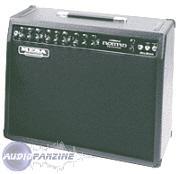 (contenu en anglais)
Afficher la traduction automatique
Afficher l'avis original
This is a 55 watt, 1x12 tube combo amp with three channels. Each channel can be switched between two modes each. The first channel can be set to clean or crunch, and the second and third channels can both be set to vintage or modern. The amplifier has spring reverb. Each channel has its own EQ settings, and the reverb can be dialed up to different values across the three channels. There is also a solo setting across all of the channels that can be kicked on via the footswitch. The footswitch has buttons for each of the three channels, reverb, and the solo boost. There is also an effects loop. The speaker can be unplugged from the amplifier, such as for use with a talkbox in between, and additional speakers can be attached to the amplifier.

Within the power tube section, the amplifier can use either 6L6's, which is what it is designed for, or it can be set to use a pair of EL34's. Within the pre-amp section it uses 5 12AX7 tubes.

The speaker is a Black Shadow.

I can't think of more features that one would really want on a tube combo amp, with the exception of built in effects, but that would probably not be implemented well and would definitely increase the cost, especially when the use of effects is so subjective anyway.

I don't own the manual and never needed it, it's very easy to use.

The only thing that's a little clunky on this amp is using the floorboard. It should be longer than it is, because it's easy to hit the wrong button or two switches at once.

This amp sounds sweet through the Black Shadow. If you want to add a ton of fullness to this combo, the addition of another Black Shadow cabinet makes all the difference in the world on low-end. It produces plenty of volume and can even hold its own against most half-stacks.

This is a great gigging amp. My only complaint is the small size of the footswitch. Having three channels make it very possible for a guitarist to get by without having to use a POD or other pre-amp distortion. The only issue I've had with it in the seven years I've owned it is the power bulb burnt out.

(contenu en anglais)
Afficher la traduction automatique
Afficher l'avis original
This was an excellent amp from Mesa Boogie while it lasted. It was a 55 watt three channels with six different modes. Each channel had two separate modes for each giving it the six modes. You have a clean channel, a crunch channel, and an overdrive channel. Each channel was extremely usable and convenient. To top it all off you got a spring reverb and solo boost for soloing.

This amp has some crunch to it with its typical Mesa Boogie style mega gain. This amp could crunch just as good as any other Mesa Boogie amp in their product line. Mesa Boogie is also known for their great clean tones. So the first channel isn't lacking in any way either.

This amp I believe was the introduction of the Roadster and Road King series. It has all the same channels, modes, and features but just is a 55 watt version. I love the way this amp sound on the clean channel and the crunch, but this thing lives in channel three on the modern switch mode. This thing will shake down walls with it over the top gain and distortion.

This amp will sound good with any guitar you through at it. I prefer a humbucker equipped guitar with the amount of gain this amp has in store. I feel the rectifier type tone natural attracts the humbucker installed guitar.

These amps have been discontinued fora while now. You can find them in the classifieds pretty easily for right around $600. not that bad or a price for an extremely versatile amplifier.