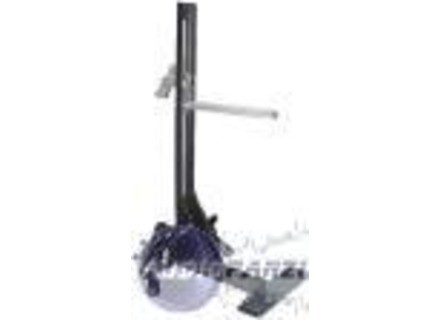 Voir les autres avis sur ce produit :
Afficher la traduction automatique
Afficher l'avis original
This is one seriously awesome piece of hardware. I've got to hand it to Richie 'Gajate' Garcia for coming up with such a brilliant idea and to LP for having the 'huevos' in the industry to mass produce and market it.

This little puppy has really changed the arena of conga drumming. Now you can be a one man band by playing congas while at the same time playing all manner of percussion with your feet. I personally use two Gajate's in my set up when I gig, playing a red jam block on the right and a cha cha cowbell on the left. On the cow bell on the left I usually keep the quarter note and play clave on the jam block on the right. You can then play a simple tumbao over top of these and you really are doing the job of two people. Not to mention the general street cred you get by being the first guy on the block to do with congas what drum set players have been doing for almost a century now (putting percussionists out of business by playing everybody's part themselves!).

But enough about all that- the gajate features a very sturdy design for use with almost any bass drum pedal (although those secured with a metal plate at the base work best). The gajate also features reversible spikes that can be set with the spike part down (for preventing slippage on rugs and such) or with a rubber stopper down to prevent slippage on wooden and slick surfaces (and to prevent the spikes from tearing those surfaces up!).

Your imagination really is the limit with this piece of hardware- anything thats mountable on an 'everything rack' is now playable with your feet- from cowbells, jam blocks, tambourines and every other manner of creation.