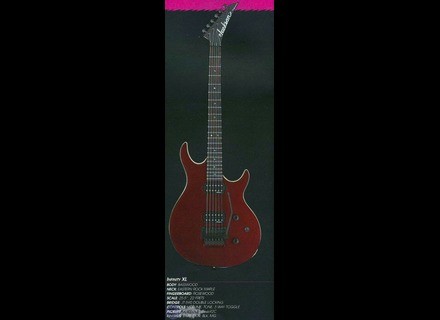 Jackson Infinity XL
4
Afficher la traduction automatique
Afficher l'avis original
This is a guitar that you don't see too often, and for very good reason, if you ask me. It's not exactly the prettiest guitar in the world. In fact, it could even win some awards for the most bizarre strat style shaped guitar ever made. However, it had a few cool features. The guitar features a basswood body, a maple neck with a rosewood fretboard, 22 jumbo frets, no binding, dot inlays, a licensed floyd rose bridge, two humbuckers, one volume, one tone and a three way switch.

The guitar was put together decently. I should mention that this had an original floyd rose swapped into it, but the guy didn't change out the studs. He just dropped it in. I hate that as the studs on this model aren't as good as the original floyd's studs. The original floyd's studs allow for better fine tuning, and they don't move around as much. If you're going to do a swap, do the swap in its entirety. The fretwork was decent for this kind of Jackson, but it had some wear going on. Considering the age, it's not too much of a surprise. The weight of the guitar was decent, but I couldn't get over how bizarre this guitar looked.

The guitar had EMGs installed in it. The owner put in two EMG 85s in this. The EMG 85 in the bridge is super thick sounding. It's not as tight as the 81, nor is it as cutting. However, it offers some girth where as the 81 simply doesn't. A lot of people dislike how bright the 81 sounds, so their solution is to put in the 85. It can work, depending on what you're going for. I generally prefer the 81 though. The 85 in the neck is great for leads, and it can deliver some sick smooth lead tones. I really enjoy this pickup for leads, but cleans can be a bit sterile at times. Then again, that goes for all EMGs, so it's nothing really new. Good for metal but average for any other genre.