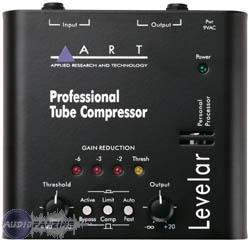 (contenu en anglais)
Afficher la traduction automatique
Afficher l'avis original
While this is the Levelar tube compressor, it actually functions more as a limiter. That is, it sets a limit, or ceiling, on the dynamics of the audio, as opposed to altering the entire spectrum of dynamics. There are 1/4" as well as XLR inputs and outputs (1 each). This is tube technology, with a little bit of the old-school design in it. This is not digital and as such is not PC or MIDI ready. The device is not rackable.

The editing on this compressor is pretty easy overall. In fact, it has very few parameters that will allow you to edit the sound. There is a knob for threshold as well as a knob for output level. There are three buttons with two settings each. One switches between active and bypass mode, one between compressor and limiter, and one between fast and auto attack. While this isn't exactly the most flexible compressor (two attack/release modes isn't exactly flexible) it is easy to use and get a good sound out of it. I haven't looked at the manual as the one I use doesn't have one, since this is an old piece of equipment.

This compressor has a pretty solid sound to it. There is little noise at all, which is always nice as compression can be quite noisy sometimes especially if your source is noisy. The one thing about this compressor is that it really does fatten up the sound quite a bit, to the point that it does color the sound a little bit. While there are two modes for compressor and limiter, I find that I end up using it as a limiter more, as there aren't a whole lot of options for control in terms of general compression. The tone is fat enough that it just works better as a limiter anyway. I actually have had good luck using it in a line of guitar effects and using it as a compressor/limiter there, it fattens up a clean lead tone really well and makes it pop nicely. I tend to have to try and put it on vocals after I've already recorded them, it takes a little bit of know-how to patch them out of Pro Tools and from the patch bay directly to this box, but it's easy once you get the hang of it.