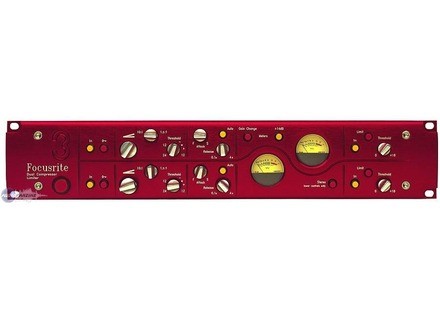 Focusrite Red 3 Dual Compressor/Limiter
5
Afficher la traduction automatique
Afficher l'avis original
The Focusrite Red 3 Dual Compressor/Limiter is a hand made, VCA based stereo compressor and limiter that I have experience using in the recording studio. I don't know what sorts of connections it has since the one I have used was already racked up in the studio that I used it at and we used the patch bay that it was connected to to make the connections. It is however rack mountable and will take up two rack spaces in a traditional casing.

The make up of the Focusrite Red 3 Dual Compressor/Limiter is generally pretty easy to understand. Each of the two channels has parameters that control threshold, ratio, gain make up, attack, and release, as well as another threshold knob for the limiter. It also contains buttons for putting the compressor and limiter in or out, as well as for gain change, meter, and stereo. While you'll definitely recognize a lot of the parameters found on here if you've got experience with compressors, it will still take a minute to learn exactly what all of the features do. The manual is put together pretty well and is thorough if you're looking for help.

The sound quality of the Focusrite Red 3 Dual Compressor/Limiter is absolutely outstanding. This box can be used for both mixing and mastering, as it has the pristine sound and stereo capabilites that make it suitable for either. I haven't really used the Red 3 too much for mastering, as I've mostly used it during the tracking and mixing process. Many a times I've run the lead vocal chain through the Red 3 just to hit it a bit and level off the signal. I've also used it during mix down stages to give sounds an extra kick or to level out a signal. Having the limiter on here also makes it versatile and certainly useful for uses in just about any capacity.