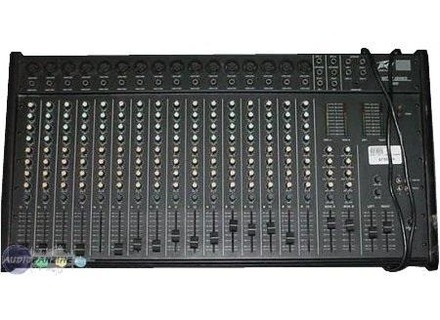 Peavey Unity 2000-16
4
Afficher la traduction automatique
Afficher l'avis original
The Peavey Unity 2000-16 is a 16 channel mixer intended for live use. There are inserts on every channel as well as line ins, which are through 1/4" connections. There is also a microphone input for each channel through an XLR jack. This mixer is a 16x2 mixer, meaning that there are two groups, generally intended as left and right for stereo. There is 3 band EQ and monitoring out available on each channel for stage use, and if the insert jack isn't otherwise being used, it could be used as a direct out if the cable is only inserted part of the way in (to the first "click").

I never had to open the manual on this one, everything functions in a very straightforward fashion.

This is a relatively quiet mixer, but it is intended for live use, not the studio. In a bind, I did use this in the studio once, using the aforementioned insert jack trick. There wasn't a lot of hiss on the recordings. To hear a track that was tracked (but not mixed) using this board, go to www.soundclick.com/exnightstalker and listen to the song "No Love Lost."