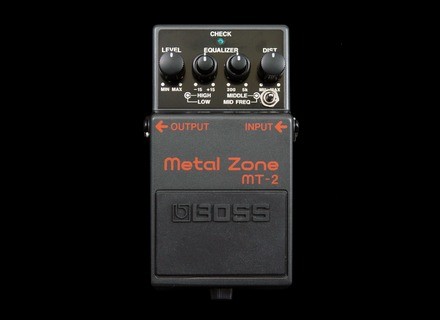 Boss MT-2 Metal Zone - Twilight Zone - Modded by Keeley
3
Afficher la traduction automatique
Afficher l'avis original
The MT-2 is pretty notorious in the guitar world. It gets tons of flak for being a very buzzy and overly compressed pedal, and a lot of that flak is warranted. It's not the most musica pedal in the world, and it certainly won't win any awards in the lower gain department. However, Keeley helped try to rectify the issues that so many people have with this pedal. Note that I said try to rectify. The pedal is still the same level, low/mid/high/mid freq and gain knobs, but this also has a special switch to select between diodes.

There is even more stuffed into this pedal than normal thanks to the three way switch. It's a bit cramped, but it works out fairly well. I never read the Keeley manual, and I'm not even sure if there is one. All the information you need is on his website, and he even discusses the mod in detail. The pedal itself is pretty much indestructible. I rarely see these things broken. You can jump on them, throw them out the window, chuck them at band mates... Ok, maybe not the last one, unless he or she deserves it. The thing will survive without any problems at all.

The sound is still very much like the normal MT-2. However, it has a bass boost and doesn't sound nearly as trebly as before. Before, you would have this nasty, buzzy distorted tone going on. Thanks to Keeley's mods, that buzzing chainsaw kinda sound is gone, for the most part. If you start cranking levels and messing with the mid frequency knob to the extreme, you can still get that tone, but it's a bit harder now that it has been modded. The three way switch on this allows you to get some different tones going on, but if you're not using much of the gain knob, you won't hear a huge difference. My favorite way of using this pedal is actually just as a clean boost and utilizing the EQ to push the midrange, similar to a tubescreamer.