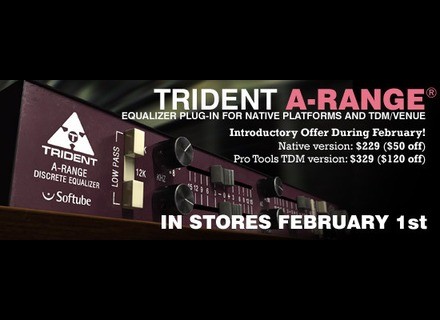 Softube Trident A-Range
5
Afficher la traduction automatique
Afficher l'avis original
Softube's Trident A-Range is an equalizer plug-in that is designed after a real Trident console. This is one of the best console emulations out there that I've used, as it's endorsed by Trident themselves and has a very realistic interface. As long as you have a compatible system, you shouldn't have any issues installing it as it only took me a few short minutes to get it going. Learning the interface should be easy even if you are unfamiliar with the original Trident console that this is modeled after, which I'm not sure on the model #. It's a four band EQ, with each band consisting of four frequencies to choose from and a gain slider for cutting or boosting. It also has a high and low pass filter, each of which has three frequencies to choose from. Lastly, in keeping with the original Trident channel strip, it has a phase button, a saturation parameter and an overall output leveler. I haven't seen a manual for this plug-in so I can't speak to it's worth.

Right now I'm running the Softube Trident A-Range plug-in in Pro Tools LE 8 on my Mac Book Pro that has a 2.2 Ghz Intel Core 2 Duo processor and 4 GB of RAM. I run Pro Tools LE with a Digi 002R audio interface and I monitor with a set of Adam A7's. Thus far I've been able to run the plug-in smoothly and without issues, but this is only while running a few instances at a time within a single session. I've yet to try and bring up a fully loaded session and try to throw EQ's on each, so I can't say what it's max power is. However, it only takes up a modest amount of processing power so most users shouldn't encounter too many performance issues.