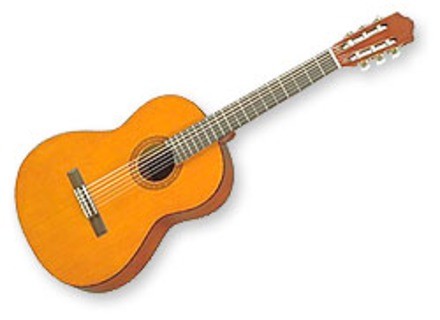 Yamaha CS40
4
Afficher la traduction automatique
Afficher l'avis original
The Yamaha CS40 classical guitar is a slightly downsized version of their traditional nylon strings, great for beginning players or people who just need something smaller to play on. It features the following:

It's got a 7/8 scale so it's not as drastic a leap as a 3/4 or 1/2 sized guitar compared to a full sized model. Otherwise it's pretty standard overall.

The design is pretty ergonomic. It's nice and light like most of Yamaha's guitars in this general range. I bought mine when I was younger and would compare it to my Junior acoustic from the company... just a nice light weight but downsized version of their full sized guitars. It doesn't have great upper fret access but there's no cutaway so it's not really a surprise there. The guitar has a decent sound right out of the box which is nice. It has a pleasant nylon string sound that I find works well and sounds close enough to a full sized one.

The tones are actually fairly surprising in this guitar. I was thinking it would be kind of weak sounding, but when I tried it in the store I knew it had a good sound and figured a proper nylon would work in my collection. It had a good tone for being a cheaper, smaller instrument. Sure it didn't have the low end or the silky highs of a really nice nylon, but for noodling around on it had a nice enough tone that works for chords or some classical passages. There's a nice low end and some good strong highs that, though they aren't perfectly flowing, they do sit will in the aural mix.

All in all I think the Yamaha CS40 is a great little guitar that is a nice way to get into a slightly downsized nylon string for not much cash. They sell new for $130 or so, and are decent enough quality to say that that is a great deal. I had mine for a few years but oddly enough didn't end up using much so I later sold it to someone else, but it was a nice guitar when I had it. If you're looking for a low priced, smaller classical, this one might do the job.
La guitare classique Yamaha CS40 est une version légèrement réduite avec des cordes en nylon traditionnelles, idéale pour les joueurs débutants ou ceux qui ont juste besoin quelque chose de plus petit pour jouer. Elle offre les caractéristiques suivantes: