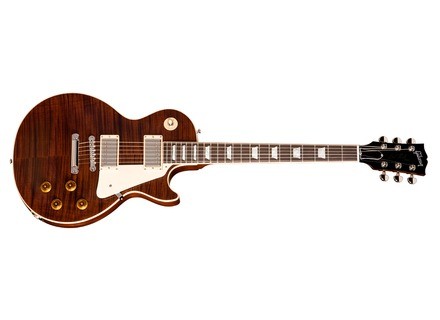 Gibson Les Paul Custom Pro
5
Afficher la traduction automatique
Afficher l'avis original
The Gibson Les Paul Custom Pro is a Guitar Center exclusive. The Custom pro's name may be a tad misleading to some. The guitar has more in common with a standard, aesthetically, than your typical Les Paul Custom. No binding or diamons inlay on the headstock, no ebony fingerboard, no triple binding at all. The guitar instead features a variety of unique color options, some solid and some displaying highly figured flame maple tops. The hardware all cream and nickel. The Custom Pro features burst bucker 2 and 3 pickups, coil tapping, a phase selection, as well as a built in kill switch.

The features of the Custom Pro's electronics are really the highlight of it's design. The coil tap function is very good in this model, the single coil sounds more than passable. The push/pull phase switch i found little use for. The guitar's playability was top notch, the neck profile feeling very nice in the hands. The pickups allowed for a lot of clarity in strumming open chords at high gain levels. Tuning stability was strong for a Les Paul. Going between several alternate arrangements the Custom Pro only fell out of tune a few times.

As stated, the coil tap features allowed for very convincing single coil tones. The guitar sounded wonderful through a naturally bright amp like the Stiletto. Cleans chimed nicely with a bell-like quality to plucked sounds. The sustain from the guitar coupled with it's highly elastic playing feel made it a lead guitarist's dream. Single note passages screamed with added gain and double stops bloomed with rich harmonics.